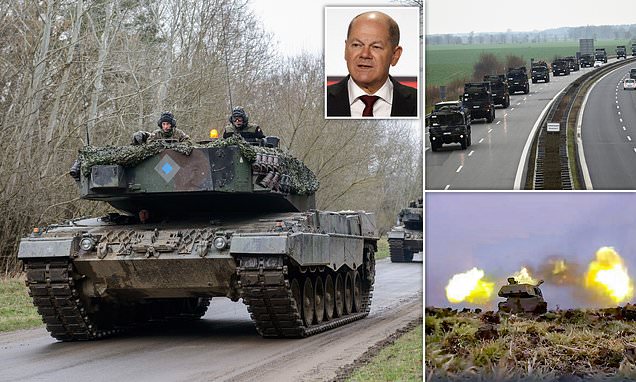 Germany’s chancellor Olaf Scholz is personally blocking the delivery of much-needed tanks to Ukraine, a former minister has revealed.

The cowardly leader is facing intense pressure from Ukraine and NATO allies to supply Kyiv with Leopard 2 tanks for its defence against Vladimir Putin‘s barbaric invasion.

But he is so far holding back from supplying the tanks or allowing other NATO countries to do so through fear of Russian retaliation, sparking a bitter row with the West and within Germany, even clashing with his foreign minister.

There are signs Scholz could finally be set to do the right thing, as his defence minister said allies can start training Ukrainians on how to use the tanks, without actually delivering them.

NATO Secretary General Jens Stoltenberg met with the defence minister and said afterwards he is confident they will come to a resolution ‘soon’.

Earlier, Norbert Roettgen, an MP and former chair of the Foreign Affairs Committee in the Bundestag, lashed out at his chancellor, accusing him of ‘stubbornness’ over an issue which could help defeat the Kremlin’s invading forces.

He told BBC Radio 4’s Today Programme: ‘There is a deep split within the government: the Chancellor and the SDP on the one side who are fiercely resisting delivering adequate and very much needed weapons like the Leopard 2 to Ukraine in order to make sure Ukraine can win, and the other two coalition partners, the Greens and the Liberals, they have been very much in favour of delivering weapons for quite some time.

‘But they are swallowing the resistance of the chancellor. In the Bundestag there has been a clear majority for the delivery of heavy weapons for months. Since summer we have been calling for that.’

When asked if Scholz will change his mind, Roettgen replied: ‘I do expect him, I have to be honest, I was personally absolutely sure that he would not let the Ramstein meeting happen without taking a decision.

‘I publicly made this speculation, I turned out to be wrong about Scholz’s stubbornness.’

A view of a part of the convoy as the mobile defence surface-to-air missile systems, Patriot, are transported to Poland yesterday

Pistorius said: ‘I have expressly encouraged partner countries that have Leopard tanks that are ready for deployment to train Ukrainian forces on these tanks.’

Stoltenberg welcomed the ‘clear message’ from Pistorius, ‘because after a decision has been taken on the delivery on battle tanks, it will take some time to identify, to make them ready and to train Ukrainian’ soldiers to use them.

He added: ‘We must provide heavier and more advanced systems to Ukraine, and we must do it faster.

‘We discussed the issue of battle tanks. Consultations among our allies will continue and I’m confident that we will have a solution soon.

At this pivotal moment in the war, we must provide heavier and more advanced systems to Ukraine, and we must do it faster.

‘I therefore welcome our discussion today. We discussed the issue of battle tanks. Consultations among allies will continue and I’m confident we will have a solution soon.’

Last week, discussions were held about the delivery of weapons from the West at the Ramstein airbase in southern Germany, but Scholz still held firm.

Under German law, the government needs to give permission before countries such as Poland or Finland could commit to re-exporting German-made tanks such as the requested Leopard 2.

Yesterday, Poland said it was willing to send German-made Leopard tanks to Ukraine without approval, but would first seek permission from Berlin, which Scholz has not yet granted.

German defence group Rheinmetall said it could delivery 29 Leopard 2A4 tanks by April/May and a further 22 of the same model around the end of 2023 or early 2024, if Scholz gives the word.

It could also supply 88 older Leopard 1 tanks, a spokesman said.

European nations agreed to spend another 500 million euros to arm Kyiv in the latest boost to the multi-billion-dollar drive to help Ukraine push back Russian forces.

German Foreign Minister Annalena Baerbock on Sunday said Germany would not stand in the way if Warsaw asked to send Leopard tanks.

‘Even if we didn’t get such an approval in the end, we will give our tanks to Ukraine anyway – within a small coalition of countries, even if Germany isn’t in that coalition’, Morawiecki said.

Polish government spokesman Piotr Muller later told state television that a formal request was ‘an important gesture and we will certainly carry it out in the coming days’.

Ukraine, which is still using Soviet-era tanks, has said the world’s indecision is only ‘killing more of our people’.

Poland announced earlier this month that it was ready to deliver 14 Leopard tanks to Kyiv but was waiting for a clear statement from Berlin authorising the transfer.

Berlin has insisted on the need for all allies to work together.

Ukrainian soldiers are seen riding on a T-72 Soviet-era tank, used widely in the ongoing conflict, in the Donetsk region, January 20

Chancellor Olaf Scholz’s spokesman reiterated that stance Monday, saying the government ‘does not rule out’ the tanks’ transfer but added: ‘It has not yet been decided.’

Roettgen added today: ‘This is not a new debate we are having in Germany, we have been having this for months, because this situation has been very clear for a very long time and [Scholz] has been blocking it effectively for months, at least since summer.

‘I think the international pressure, the war crimes, the effect and the difference German weapons could do in this war together with other European deliveries, around about 300 tanks will be necessary to make a real difference, will become so big and irresistible that finally, eventually the German chancellor will change course but it will have taken too long, but it will happen eventually.’

Haunted by its post-World War II guilt, Germany has always acted carefully when it comes to conflicts.

German laws require countries that purchase its weapons to ask for approval before handing them over.

This is to prevent German-made armaments from being used in conflict zones against Germany’s interests.

On Friday at Ramstein, some 50 nations agreed to provide Kyiv with billions of dollars’ worth of military hardware, including armoured vehicles and munitions needed to push back Russian forces.

Russia‘s parliament officials have warned that nations arming Ukraine risk their own destruction, which would lead to ‘a global catastrophe’.

State Duma chairman Vyacheslav Volodin said: ‘Supplies of offensive weapons to the Kyiv regime would lead to a global catastrophe.’

Ukraine says the heavily armoured Leopard battle tanks would give its ground troops more mobility and protection ahead of a new Russian offensive expected in coming months, and could give them the firepower they need to regain the momentum.