After the longest election for Speaker of the House since 1859, Congressman Kevin McCarthy (R-CA) has finally taken the helm of a slim Republican majority in the U.S. House of Representatives, potentially heralding a new era for Congressional action on technology policy. With a White House and Senate under Democratic control, passing sweeping legislation may be a challenge for the GOP, but it’s likely that they will apply pressure on the current and forthcoming tech policy goals of the Biden-Harris administration.

Regarding the latter, President Biden recently published a rare op-ed in The Wall Street Journal calling for “bipartisan action from Congress to hold Big Tech accountable”—perhaps one issue where there appears to be some consensus. Partisan differences may lie in how Republicans are likely to use their new power over several House committees to ramp up oversight of recent government investments in infrastructure and their long-standing call for a more accurate broadband coverage map generated by the split-vote Federal Communications Commission (FCC). McCarthy has also signaled heightened interest in global supply chain issues related to China as evidenced by a newly formed House committee that plans to investigate competition, as well as supply chain resilience and sustainability.

These factors provide some insight into what to expect in the 118th Congress, particularly in the areas of big tech accountability, broadband infrastructure, relations with China, and the global supply chain.

As the Biden administration gets tougher on antitrust and conservative politicians continue to allege liberal bias in social media platforms’ content moderation, cracking down on big tech companies may be a course toward more bipartisanship around tech regulation. President Biden’s recent op-ed also called for expeditious privacy protections to limit the collection of sensitive data with a total prohibition on targeted advertising to children. In line with his grand plan for stronger anti-trust and competition policies, the president reiterated his interest in leveling the “playing field” in the tech sector, echoing his administration’s play toward stricter scrutiny over the review and approval of mergers and acquisitions like Microsoft’s acquisition of Activision.

President Biden’s op-ed also dived into the need for actionable reform of Section 230 of the Communications Decency Act, which both insulates online platforms from liability for their users’ posts while reinforcing their right to moderate that content. Not since former President Trump has the White House opined on this issue; at the time, two commissioners objected to Trump’s direction to the FCC to initiate a rulemaking proceeding without appropriate authority, which was never implemented. How Biden proceeds may finally encourage some movement among congressional Democrats, but his efforts may still be stalled by House GOP members.

To date, the National Telecommunications and Information Administration (NTIA) at the U.S. Department of Commerce has distributed initial planning funds for the Broadband Equity, Access, and Deployment (BEAD) Program, a broadband expansion initiative created by the Infrastructure Investment and Jobs Act’s (IIJA) which allocated $65 billion to close the digital divide. Separately, the FCC has been updating the national broadband maps and adjusting to the congressional timeline that seeks updated maps to guide the appropriate allocations of BEAD funding. But members of the 118th Congress have started to lodge concerns around the accuracy of the FCC maps and, earlier this month, Senators Jacky Rosen (D-NV) and Catherine Cortez Masto (D-NV) sent a joint letter to the Commission urging additional actions. Further, Republicans have expressed frustration with the Biden administration on its big spending, and efforts are underway by the House majority to examine the spending and oversight of the IIJA’s broadband investments. Under Speaker McCarthy, the House will further scrutinize broadband expenditures, as well as the FCC’s coverage maps.

Despite Republicans’ concerns with the current administration’s spending, closing the digital divide should be an area of opportunity for bipartisan action, especially since many Republicans have constituents in severely under-served rural areas. In September 2020, the Senate Republican Policy Committee published a policy paper outlining Republican efforts to close the digital divide and improve the accuracy of FCC broadband availability data, and in September 2022 Senator Lisa Murkowski (R-AK) called for more coordination between Tribal, state, and federal governments to expand broadband access in native communities. Although Democrats and Republicans differ on approaches to greater broadband deployment and digital inclusion activities, there should be consensus in this area due to its national import.

Interestingly, one area where lawmakers have already coalesced is around the U.S.’s stance on China. Speaker McCarthy secured a bipartisan victory to form the Select Committee on the Strategic Competition between the United States and the Chinese Communist Party. The committee has been authorized to investigate and submit policy recommendations concerning the status of the economic, technological, and security progress of China. Congressman Mike Gallagher (R-WI) will chair the new committee, comprised of nine Republicans and seven Democrats, pending assignments. In a joint op-Ed with Speaker McCarthy, Rep. Gallagher wrote that the committee would focus chiefly on concerns of supply chains, economic dependence, defense, and data privacy. While these powers are largely investigative rather than legislative, the bipartisan move signals that the 118th Congress may have the political capital required to escalate the intensifying power competition between the U.S. and China.

Legislatively, the focus on advancing U.S. technology leadership may turn out to be a prominent focus of this Congress. In the 117th Congress, lawmakers passed the CHIPS and Science Act (CHIPS) with bipartisan support, providing monies for research and development for advanced technologies. Notably, these initiatives were designed to provide unique opportunities for rural America and economically marginalized communities to fully participate in the changing economy. The new Congress may opt to build on this momentum and ensure robust appropriations of the CHIPS Act, while also seeking out emerging investment opportunities that strengthen global competitiveness. Accordingly, an important question for this Congress will be whether the House GOP will search for legislative cooperation to further the U.S.-China great power competition or leverage the investigative and attention-grabbing nature of the new select committee on China. Regardless, how Congress and President Biden position U.S.-China relations will be an animating policy issue in 2023.

Although bipartisanship exists around the new select committee, it’s worth noting that lawmakers like Congresswoman Judy Chu (D-CA) hope that this effort does not contribute to the xenophobia discriminating against Asian Americans and Pacific Islanders (AAPI) populations, who are likely to be villainized as Chinese business practices are further scrutinized. Going forward, it remains to be seen how both parties will make the interrogation of Chinese business practices constructive to deliver substantive policies that strengthen the U.S. economy.

Over the past few years, global supply chains buckled under pressure from the COVID-19 pandemic, geopolitical crises such as the war in Ukraine, and even an avian flu. While the worst of this crisis may be behind us, supply chains have yet to fully stabilize, emphasizing the need for increased resiliency and sustainability—points that will be brought in the new Select Committee on China. In September 2022, Speaker McCarthy also published a suite of policy proposals from the GOP Jobs & the Economy Task Force, which may forecast the steps that the House, under his leadership, will take to secure U.S. supply chains, including technology. The report emphasizes U.S. dependence on foreign nations for energy resources and critical minerals, calling for tax deductions for “mining, reclaiming, or recycling of critical minerals and metals from the United States” and decrying President Biden’s easing of oil restrictions on Venezuela as “unacceptable.” A consistent theme throughout the task force’s proposals is that of cutting red tape, whether loosening the SEC’s climate regulations or lifting restrictions on infrastructure projects and truck deliveries, which likely previews the strategy the GOP will adopt for confronting the supply chain crisis.

The future of 5G technology may be another critical policy area that the new Congress will likely focus on. Some analysts expected this issue to make an appearance in Congress’s omnibus spending bill last month, but it largely went unaddressed. One exception is the FCC’s authority to hold spectrum auctions, which was afforded a brief extension through March 9, 2023. However, how these auctions will be managed for 5G is still an open question. The US wireless industry has been lobbying lawmakers to reserve spectrum bands between 3.1GHz and 3.45GHz to be auctioned for 5G use under exclusive licenses. This proposal has been met with opposition from the military, which uses that band to operate radar operations. Where Congress falls in support of the reallocation of government spectrum, especially from the U.S. Department of Defense, will drive how this issue lands on the full list of other priorities of Democratic and Republican leaders.

While these and other policy considerations are likely to percolate on Capitol Hill, numerous congressional leadership positions have been filled. New committee chairs on tech-related issues include Congresswoman Cathy McMorris Rodgers (R-WA), who will chair the Energy and Commerce Committee, overseeing healthcare, energy, and technology policy. Within a few days of assuming the new role, the House passed her Protecting America’s Strategic Petroleum Reserve from China Act, which would block the sale of crude oil from the SPR to China. The powerful Appropriations Committee will be chaired by Congresswoman Kay Granger (R-TX) whose implementation of McCarthy’s planned cuts to government expenditures could affect continued investment in broadband infrastructure. Another key leadership announcement was the renomination of Gigi Sohn to the FCC to break the current 2-2 deadlock, which has stalled movement on key Biden initiatives at the agency. The lack of a Democratic majority has also limited the ability of the FCC Chair, Jessica Rosenworcel, to codify her legacy, while advancing the goals of expanded broadband infrastructure under the IIJA. Sohn’s name has been floated by the Biden administration for the last two years, but with a majority Senate, she may face fewer obstacles to a formal appointment.

Biden’s recent op-ed appears to be an attempt to throw out several “white flags” to build consensus around his tech policy agenda items. But Republican leaders in the House are thinking otherwise when it comes to what his administration started, and Speaker McCarthy faces the challenge of appealing to the concerns of the Freedom Caucus in his new role. With two years left in the White House, President Biden may have to choose a couple of areas to impact, while relying on his Senate majority to secure his legacy through political appointments.

The authors acknowledge the research support of CTI’s Jack Malamud and Brady Tavernier. 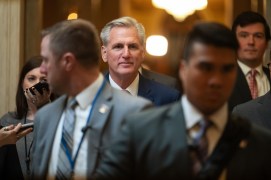