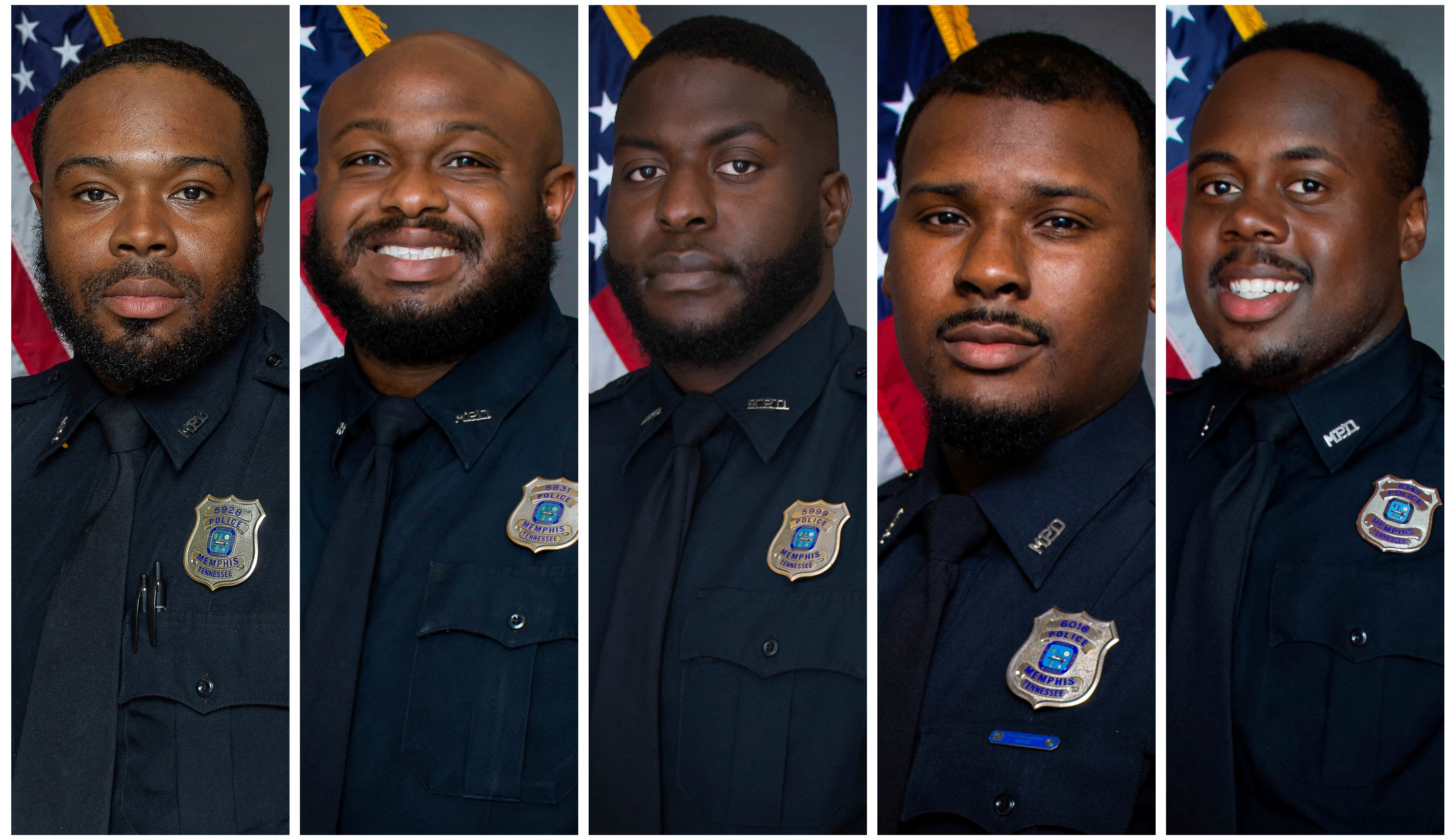 Officers who were terminated after their involvement in a traffic stop that ended with the death of Tyre Nichols, pose in a combination of undated photographs in Memphis, Tennessee, U.S. From left are officers Demetrius Haley, Desmond Mills, Jr., Emmitt Martin III, Justin Smith and Tadarrius Bean. Memphis Police Department/Handout via REUTERS.

The video of Memphis police beating a Black man who died after a traffic stop on Jan. 7 reminded civil rights attorney Ben Crump of the assault on Rodney King, Crump said after viewing the police bodycam recording with the man’s family on Monday.

Tyre Nichols, a 29-year-old father of a 4-year-old boy, died in the hospital on Jan. 10 of injuries he sustained during his arrest by five officers, all of whom have been fired.

“He was defenseless the entire time. He was a human pinata for those police officers,” attorney Antonio Romanucci, Crump’s co-counsel, told reporters.

“It was an unadulterated, unabashed, nonstop beating of this young boy for three minutes. That is what we saw in that video,” he said, adding, “There were multiple uses of force against him.”

The attorneys said local, state and federal investigators promised to release the bodycam video to the public within a week or two. The Tennessee Bureau of Investigations, FBI and Justice Department are investigating the incident in addition to Memphis police and the Shelby County District attorney.

The police department determined after its investigation that the officers violated multiple policies, including using excessive force, failing to intervene and failing to render aid.

Crump said the video reminded him of the landmark video of Los Angeles police beating King in 1991, sparking violent protests and reforms in the department.

“Regrettably, it reminded us of (the) Rodney King video,” said Crump, who previously represented the families of George Floyd and Trayvon Martin. “Regrettably, unlike Rodney King, Tyre didn’t survive.”

The last words heard on the video were Nichols calling for his mother three times, Crump said.

“He was less than 80 yards (73 meters) away when they murdered him. Yes, I say murder,” said Nichols’ mother, RowVaughn Wells.

People who knew Nichols said he was an accomplished skateboarder who had recently enrolled in a photography class and came home to his mother during his lunch break from his job at FedEx.

“My son didn’t do no drugs. He didn’t carry no guns. He didn’t like confrontation. None of that. That’s why this is so hard,” she said.

“Transparency remains a priority in this incident, and a premature release (of the video) could adversely impact the criminal investigation and the judicial process,” she said.

Relatives told WREG television it was especially hurtful because all the officers involved were Black.

Crump said he has found that the race of the citizen in these cases tends to the determining factor in the amount of excessive force exerted, not that of the officers involved.

Memphis police on Friday identified the former officers as Tadarrius Bean, Demetrius Haley, Emmitt Martin III, Desmond Mills, Jr., and Justin Smith. Each had served with the department about 2-1/2 to 5 years.

A photo of a bloodied, intubated Nichols released to the public helped fuel multiple days of protests and calls of “Justice for Tyre” in Memphis, a city of 630,000 that is 65% Black.