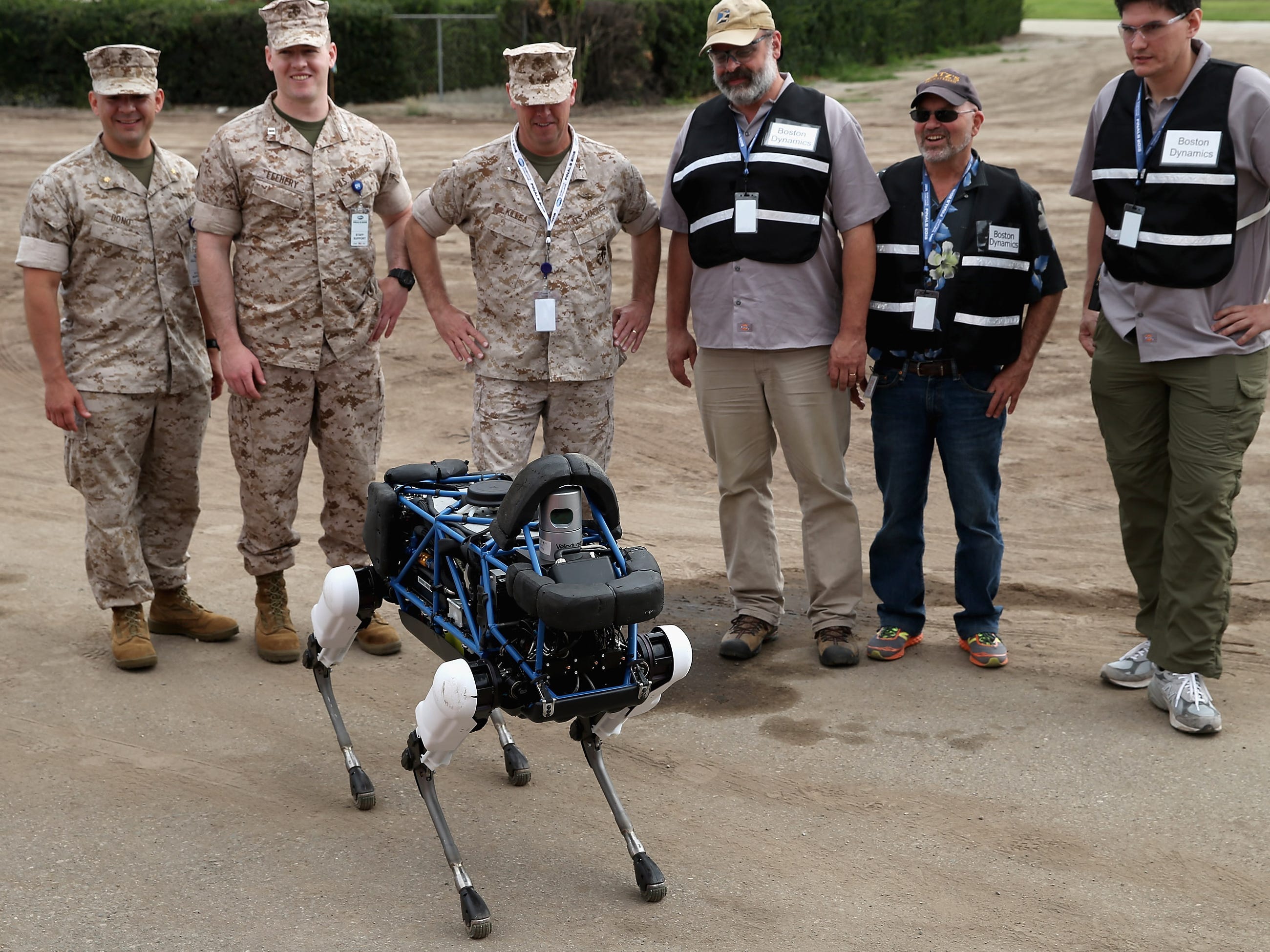 United States Marines and representatives from Boston Dynamics look at Spot, a four-legged robot designed for indoor and outdoor operation, during the Defense Advanced Research Projects Agency Robotics Challenge at the Fairplex June 5, 2015 in Pomona, California. Organized by DARPA, the Pentagon’s science research group, 24 teams from around the world are competing for $3.5 million in prize money that will be awarded to the humanoid robots that best respond to natural and man-made disasters.

The state-of-the-art robots used by the Pentagon had an easily manipulated weakness, according to an upcoming book by a former policy analyst: Though they’re trained to identify human targets, the bots are easily fooled with the most lackluster of disguises.

In his upcoming book, “Four Battlegrounds: Power in the Age of Artificial Intelligence,” former Pentagon policy analyst and Army veteran Paul Scharre writes that the Defense Advanced Research Projects Agency (DARPA) team trained its robots with a team of Marines for six days to improve its artificial intelligence systems.

Scharre did not immediately respond to Insider’s requests for comment. “Four Battlegrounds: Power in the Age of Artificial Intelligence” will be released on February 28.

Shashank Josi, defense editor at The Economist, posted several excerpts from Scharre’s book on Twitter. In the passages, Scharre details how, at the end of their training course, the Marines devised a game to test the DARPA robot’s intelligence.

Eight Marines placed the robot in the center of a traffic circle and found creative ways to approach it, aiming to get close enough to touch the robot without being detected.

Two of the Marines did somersaults for 300 meters. Two more hid under a cardboard box, giggling the entire time. Another took branches from a fir tree and walked along, grinning from ear to ear while pretending to be a tree, according to sources from Scharre’s book.

Not one of the eight was detected.

“The AI had been trained to detect humans walking,” Scharre wrote. “Not humans somersaulting, hiding in a cardboard box, or disguised as a tree. So these simple tricks, which a human would have easily seen through, were sufficient to break the algorithm.”

Though it is unclear when the exercises in Scharre’s book took place, or what improvements have been made to the systems since, DARPA robots’ antics have long faced obstacles to their performance, including poor balance and concerns over their potential to cause accidental killings due to AI behaving in unpredictable ways.

The Department of Defense and DARPA did not immediately respond to Insider’s requests for comment.