Rachel O’Leary Carmona was stunned by the traffic. She was in a car with a friend heading from New York to Washington, D.C., the day after President Donald Trump’s inauguration, to participate in the Women’s March.

Her friend said the gridlock was probably because of the march. Carmona was skeptical. But when they stopped in Delaware for gas, she was surprised to see throngs of women asking people to sign petitions. “This is something completely different,” Carmona remembers thinking. Mobilized by Trump’s election, millions of people marched that Saturday in cities across the country. A year later, Carmona joined the Women’s March organization, where she now serves as executive director.

In the wake of the Supreme Court’s June decision in Dobbs v. Jackson Women’s Health Organization, which overturned Roe v. Wade and decimated nearly 50 years of abortion rights, Carmona anticipates another strong showing for this year’s march. It is slated for January 22, the anniversary of the court’s 1973 ruling in Roe. But instead of Washington, D.C., this year, the main event will be held in Madison, Wisconsin. “We wanted to send a clear message to elected leaders, to our base, to the people that we’re going to where the fight is,” Carmona said. “And that’s at the state level.”

With this shift there’s a lot on the line for reproductive rights, including in Wisconsin, where a suit challenging the validity of an 1849 abortion ban is winding its way through the courts. This spring, voters will decide whether the state’s Supreme Court — final arbiters of the Wisconsin Constitution — will flip to provide a 4-3 liberal majority. “We have a lot of infrastructure in Wisconsin, and so we … have the ability to make an impact there,” Carmona said. “We have a mandate to do so.” 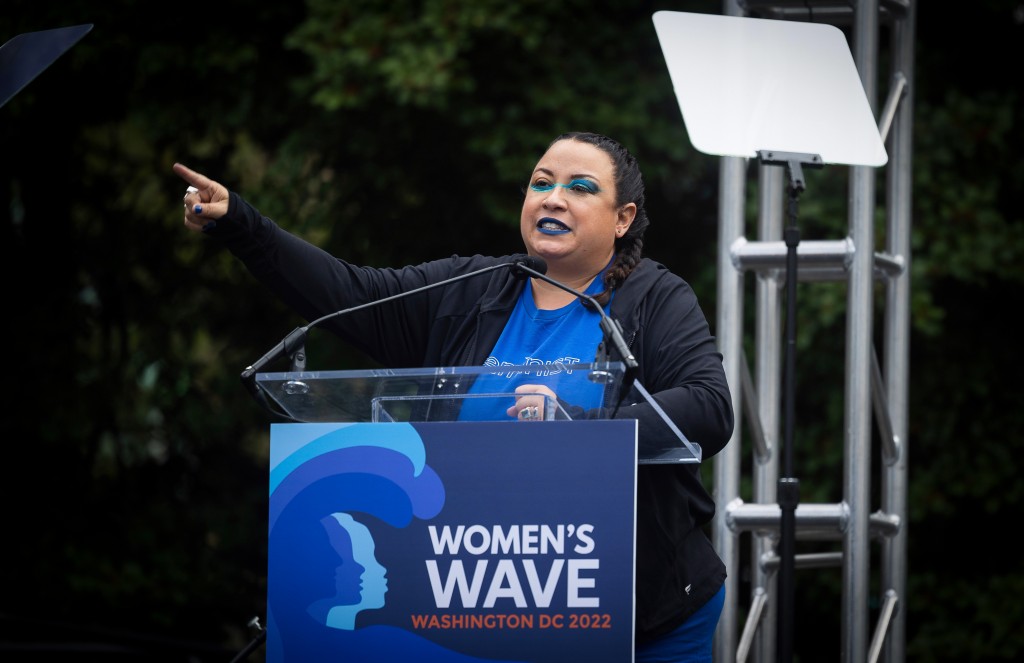 Since Dobbs, 12 states have banned abortion entirely (save for some exceptions that exist in name only), and state court challenges to those bans are pending in Kentucky, Louisiana, Oklahoma, and West Virginia, according to the Guttmacher Institute. Abortion is unavailable in two states: North Dakota, which saw its sole clinic moved to Minnesota, and Wisconsin, where clinics stopped providing care while the legality of the pre-Roe ban is in limbo. Four states — Arizona, Florida, Georgia, and Utah — currently allow abortion with gestational limits, ranging from six weeks in Georgia to 18 weeks in Utah. In Indiana, Ohio, and Wyoming, lawmakers have passed draconian bans on care that have been blocked by state courts pending litigation.

Since June, the state of play has been in near constant flux; earlier this month, the Idaho Supreme Court ruled that the state constitution contained no right to abortion, just hours after the South Carolina Supreme Court found the opposite true of its constitution. In a fiery opinion, Justice Kaye Hearn (only the second woman to serve on the South Carolina court) struck down a six-week abortion ban on the grounds that it violated the constitution’s explicit right to privacy. “We hold that the decision to terminate a pregnancy rests upon the utmost personal and private considerations imaginable, and implicates a woman’s right to privacy,” she wrote.

“At the risk of stating the obvious, in order for a choice to be informed, a woman must know she is pregnant.”

Hearn noted that in passing the restriction, lawmakers discussed the importance of making an informed choice about having an abortion — a professed desire laughable in the face of a six-week ban. Most people don’t even realize they’re pregnant at six weeks, Hearn wrote. “At the risk of stating the obvious, in order for a choice to be informed, a woman must know she is pregnant.”

While the Idaho Supreme Court found that there was no protection for abortion in the state’s constitution, it noted that voters had the power to change that — by electing new legislators or amending the constitution. Voters in California, Michigan, and Vermont did just that last year, enshrining constitutional protection for reproductive freedom. Voters in Kansas and Kentucky defeated amendments that would have stripped their constitutions of such protections.

The state ballot successes have inspired plans for initiatives in other states, including Missouri and Ohio. In response, Republican lawmakers have sought to make it harder to get citizen-led initiatives on the ballot. “Those lawmakers know their ideological views are out of sync with their voters,” Kelly Hall, executive director of the Fairness Project, told The Guardian. “They are trying to change the rules of the game.”

Although the destruction of Roe motivated voters in November’s midterm elections, turning an anticipated “red wave” into a mere trickle, Republicans in Congress seem to have zero desire to read the room. Once House Republicans finally managed to elect a speaker, they passed two largely symbolic attacks on abortion: a resolution condemning attacks on churches and anti-abortion “crisis pregnancy centers,” despite the fact that threats of violence targeting actual abortion providers have skyrocketed, and a measure that would create new criminal penalties for doctors who fail to provide specific care to a child “born alive” after an attempted abortion, which, it should be said, is rhetoric divorced from medical reality.

“The offensively named ‘born-alive’ legislation is another cruel and misguided attempt to interfere with evidence-based medical decision making between parents and their physicians,” Iffath Abbasi Hoskins, president of the American College of Obstetricians and Gynecologists, said of the bill. “It is meant to incite emotions.”

But there is no doubt that anti-abortion lawmakers in states around the country will follow suit. The Texas legislature, which only meets every other year, has teed up a slate of anti-abortion measures — including a strategy for punishing people who travel out of state for care. In Virginia, Gov. Glenn Youngkin, thought to have 2024 presidential ambitions, has pushed for a 15-week abortion ban and said he would “gleefully” sign any anti-abortion measure that lands on his desk. A special election this month to fill a state Senate seat vacated by a Republican was seen as a referendum on Youngkin’s glee; on January 10, voters flipped the seat, electing Democrat Aaron Rouse, who ran on an abortion rights platform. The election has strengthened the state Senate’s Democratic majority, making it unlikely that Youngkin’s anti-abortion priorities will go anywhere anytime soon.

In recent weeks, the Biden administration has taken steps to blunt the impact of some anti-abortion legislation. In December, the Food and Drug Administration announced labeling changes for emergency contraceptives, making clear that they do not induce abortion (long an anti-science talking point of the anti-abortion crowd). Weeks later, the FDA announced regulatory changes that would allow retail pharmacies to dispense medication abortion pills — a move that could significantly expand access ahead of attempts to restrict its availability. Medication abortion, available in the earliest weeks of pregnancy, now accounts for more than half of all abortions in the U.S. The Department of Justice also issued an advisory opinion to the U.S. Postal Service announcing that a prudish federal law initially enacted in 1873 did not prohibit sending medication abortion pills through the mail, even to people in states that have banned abortion.

Lawmakers elsewhere are moving to enact greater protections for reproductive autonomy. Earlier this month, the Illinois Legislature passed an omnibus bill to expand and protect access to care, which has since been signed into law. The state has become a haven in a vast abortion desert; according to Planned Parenthood of the St. Louis Region, which operates an abortion clinic in Illinois just over the Missouri state line, the law couldn’t come a minute too soon. Since Roe fell, wait times for care in Southern Illinois have jumped from three or four days to two-and-a-half weeks. There’s been a nearly 80 percent increase in abortion patients — and a more than 300 percent increase in the number of patients coming from outside Missouri or Illinois.

“Providers and patients are navigating unprecedented times,” Southern Illinois abortion providers said in a joint statement prior to the bill’s passage, encouraging lawmakers to act swiftly. “What we once hypothetically planned for has now become our reality, and the impact and burden abortion bans have on providers and patients is a public health crisis that affects all Illinoisans.” 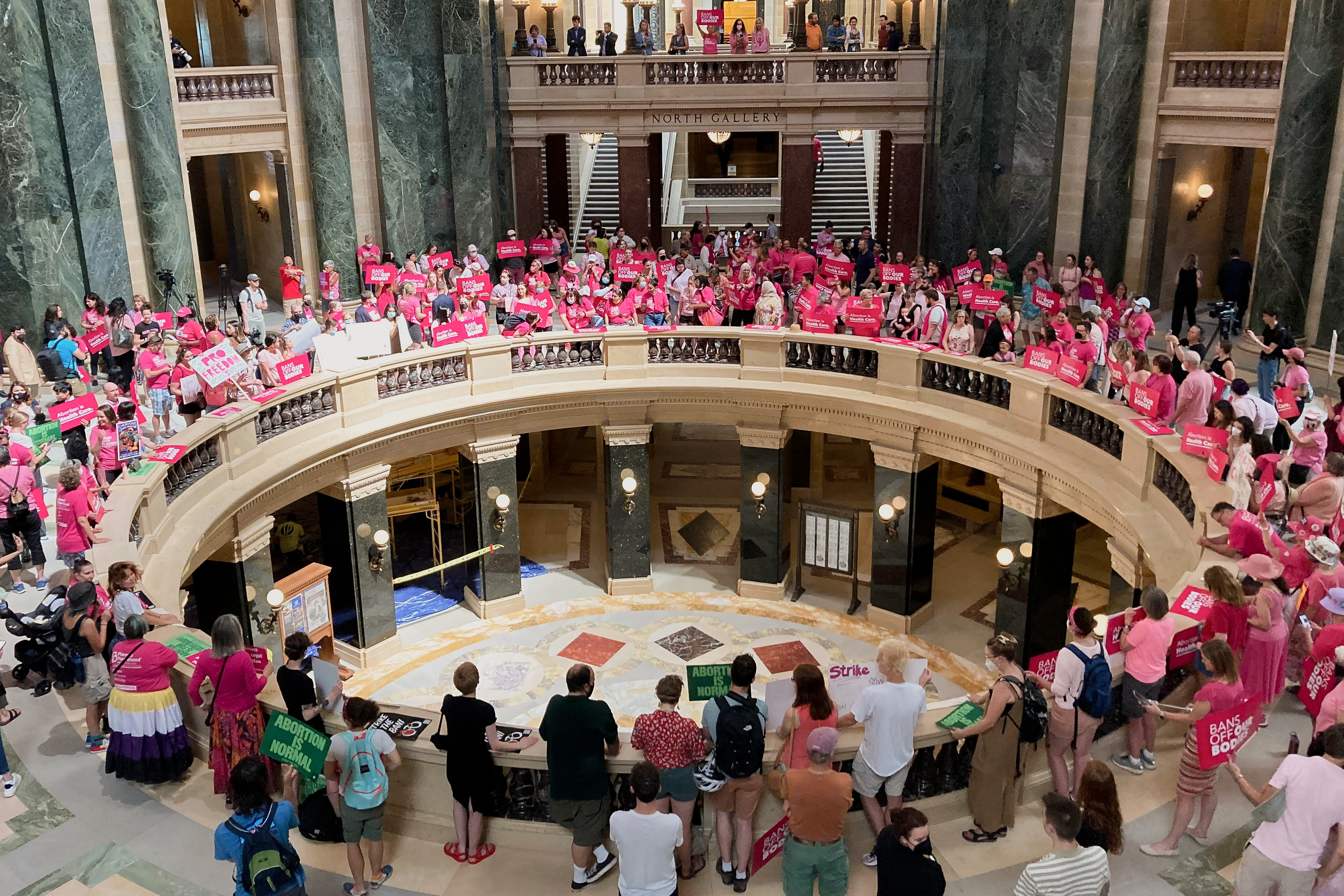 In recent years, Wisconsin has been ground zero for conservative activism, funded in no small part by the Koch brothers. The state is among the most gerrymandered in the nation and was one of seven states implicated in Trump’s fake electors scheme. According to Carmona, it’s time to push back. The decision to hold the Women’s March in Madison reflects just how much is at stake, she said. So does the theme of the march: “Bigger Than Roe.”

The energy on the ground is encouraging, she said. In advance of the state Supreme Court election, the organization has rallied thousands of donors and nearly 1 million “action-takers”: people who have signed up for the march, signed on to petitions, and volunteered to knock on doors. Spring elections are often won by a slim margin, she noted. “We feel very, very well positioned to take up this fight because, honestly, mobilizing a thousand people is well within our ability.”

“We want to be clear that … this isn’t a single-issue march because we don’t lead single-issue lives,” she said. “And that women are coming for more than just the bare minimum, which should be bodily autonomy. We’re actually coming for a future where we can thrive.”

The post “We’re Going to Where the Fight Is”: Abortion Rights Movement Sets Its Sights on Key States appeared first on The Intercept.