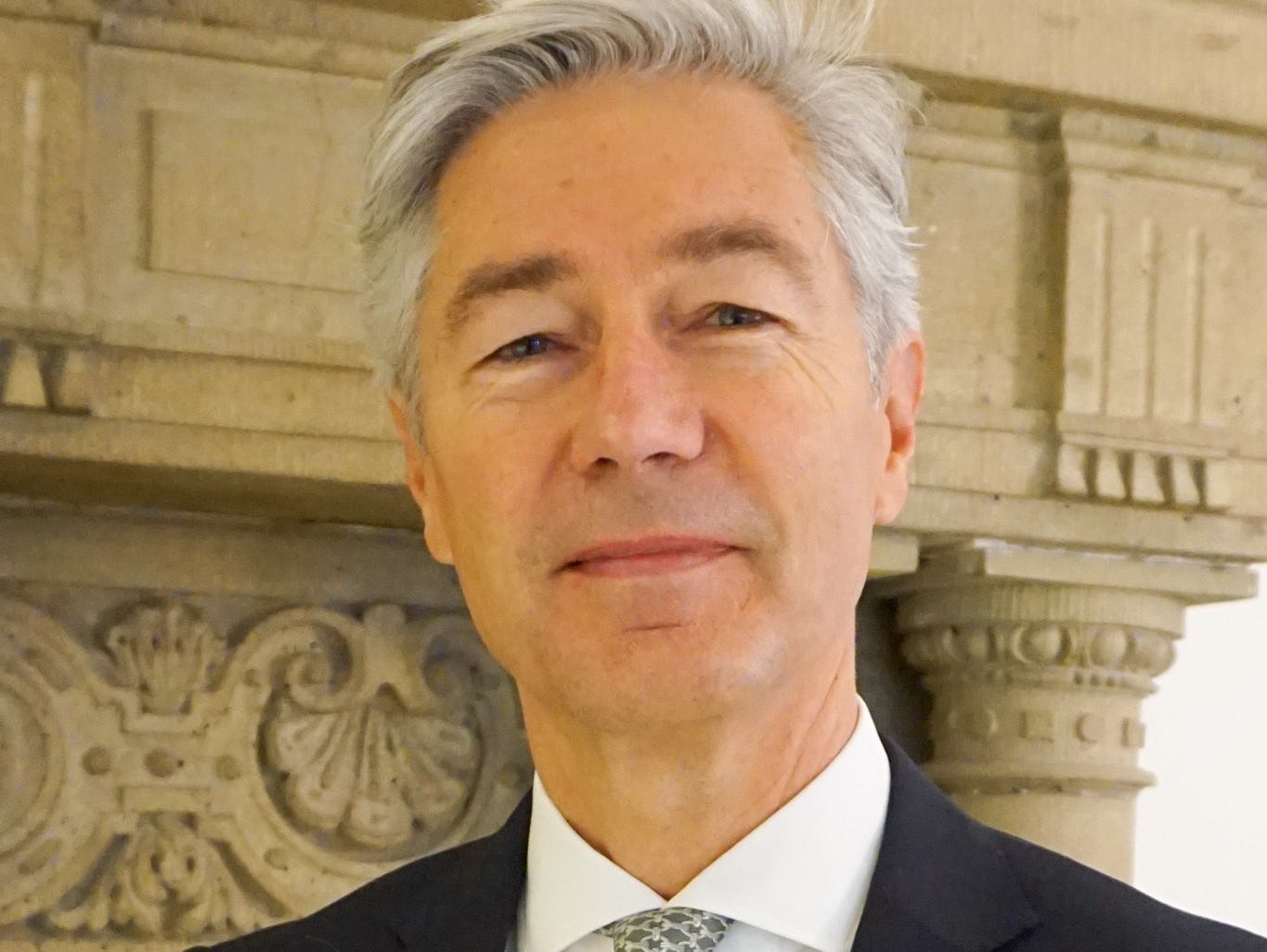 This as-told-to essay is based on a conversation with Hans-Rudolf Ruetti, a 62-year-old hotelier with 30 years of experience from Davos, Switzerland, about preparing the Steigenberger Grandhotel Belvédère for guests at the World Economic Forum. It’s been edited for length and clarity.

For more than 50 years, what’s now known as the World Economic Forum (WEF) has taken place in Davos, and every year, the Grandhotel Belvédère has hosted WEF guests. Bill Clinton stayed at this hotel at some point. Angela Merkel, Michael Dell, Bill Gates — you name it, they’ve been here.

I became the general manager of the Grandhotel Belvédère in November 2021, so I’ve only seen the 2022 WEF, which was moved from January to May. This year, the WEF is expecting nearly 3,000 participants.

Last year’s forum didn’t have quite the same energy, so we’re happy to have the real Economic Forum back after such a long break. Besides the assembly itself, there are many side events taking place around Davos. This is why there’s a lot of construction going on around both the city and the hotel. Luckily, we don’t have much snow right now, and that makes it easier to prepare. 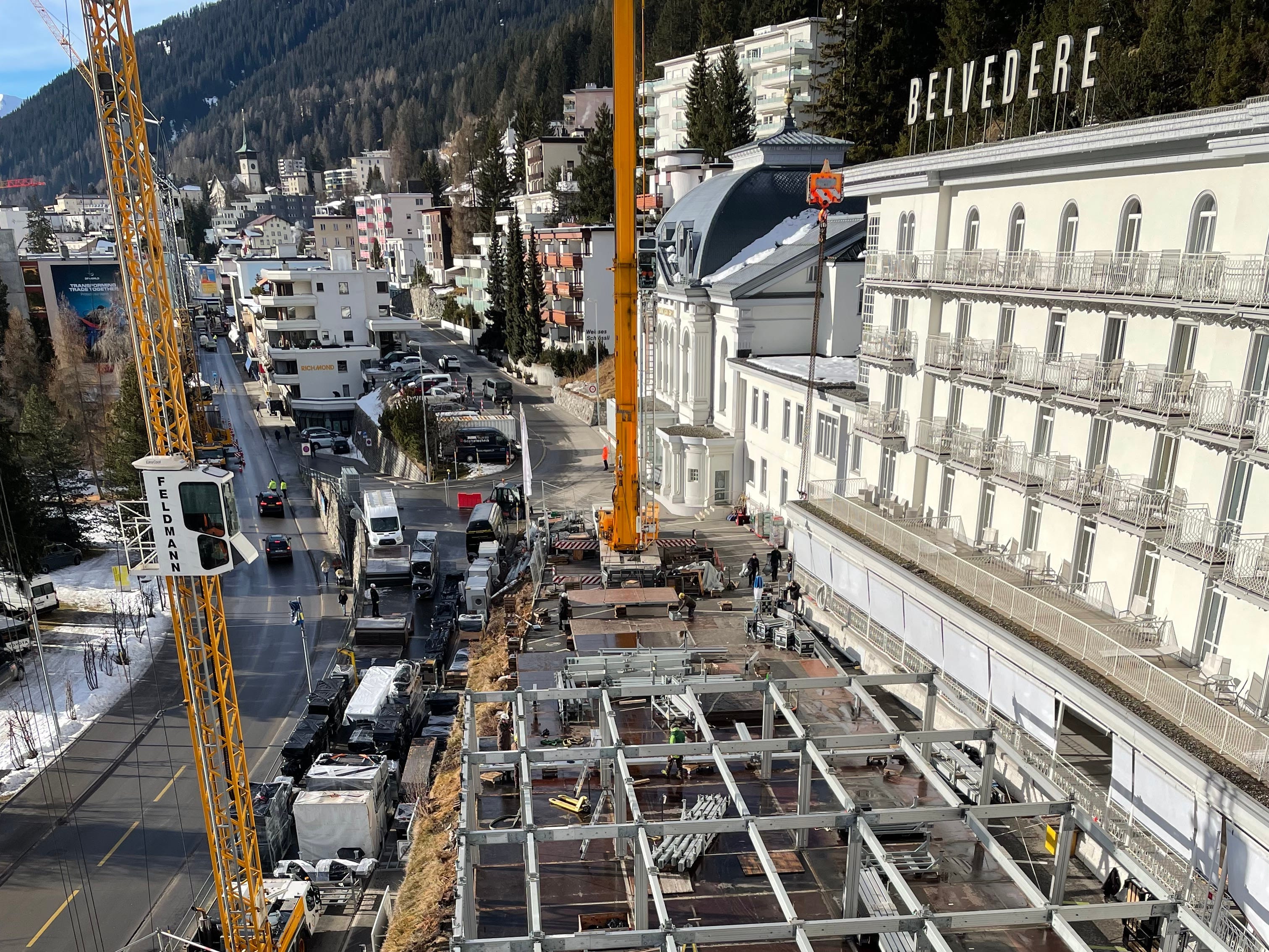 In preparation for the WEF, we closed the hotel to the public

The hotel is now exclusively open for all the important guests coming from around the world to attend the WEF from January 2 until January 28.  We emptied almost half of the hotel in order to set up for all of the events and prepare for the guests.

During the WEF, no one will have access to the hotel without their badge. We have X-ray machines and metal detectors, and each and every person has to go through these to enter the building. It’s almost like an airport.

Davos itself is like a military zone, where you have limited access and everything is cordoned off. There are several security checkpoints that visitors have to pass through to get to the main street in Davos. That area, about 300 or 400 meters, is strictly blocked off, and you’re not allowed to enter unless you have a badge.

Of course, there are a lot of police officers inside and outside of Davos, plus we have thousands of security people and army members making sure this event is safe and secure.

To accommodate the WEF and its events, we’ve increased our staff by about 150%

We’ve added an additional 150 employees — and that doesn’t include about 100 construction workers around the hotel. It looks like a very busy construction site, but you’ll see the same thing all along the main road in Davos.

There’s a huge three-story pavilion that was built just for the forum to host the press and employees of the WEF. I don’t even know how many people can fit in it. 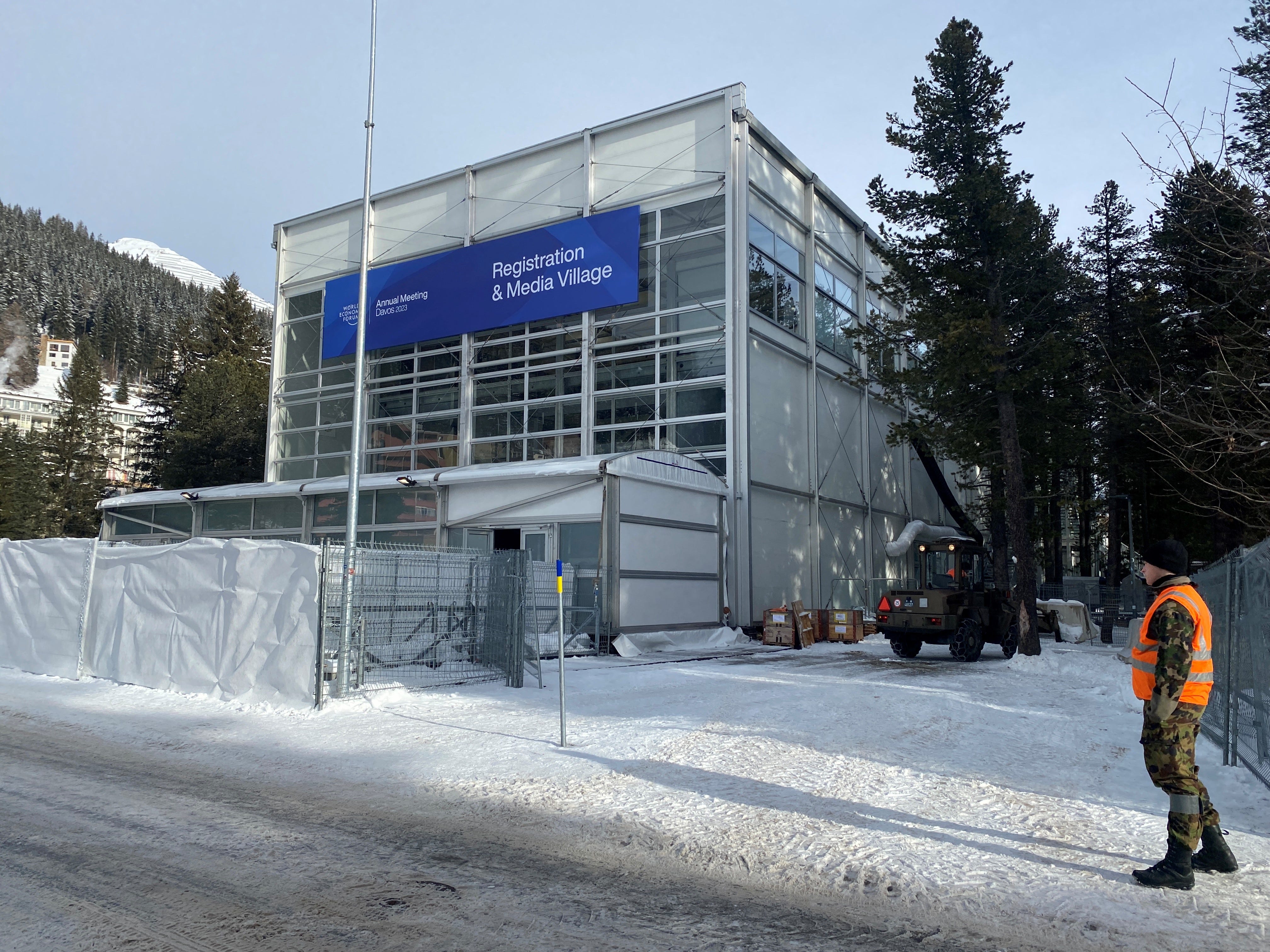 The press and media center in Davos.

At the hotel, we built two temporary two-floor pavilions. There are several events being put on by important guests, and this is always a challenging task when it comes to safety and security. Companies like McKinsey and PricewaterhouseCoopers are holding events like the famous night caps where powerful people meet.

We also built an additional three kitchens from where we can deliver food exclusively for hotel guests and events hosted here by the forum participants. The food isn’t necessarily fancier, but it takes on a totally different dimension because we have events where there are a few hundred guests invited. These companies organize and pay for the food that will be served.

Food is more expensive than usual at the hotel because of the investments we’ve made — building pavilions and additional offices. We have a huge cost that we have to make up for, but the price depends on whether it’s breakfast, lunch, or dinner and the location it’s being served at.

I run a 24-hour operation during the WEF

The day starts at 6 a.m. with breakfast meetings, followed by lunches and more meetings, then dinners and nightcaps that can go until 3 or 4 the next morning. Then everything starts all over again. It’s a huge operation.

As a result, we have very limited time slots for when we can have goods or foods delivered. So if we don’t have something in stock and it has to be delivered, it becomes a real nightmare. There’s so much traffic.

It takes five minutes to walk from the hotel to the conference center — Davos Congress, where the forum takes place — but if you take a limousine (as many guests do), it can easily take 45 minutes. It’s also winter and below 0 degrees Celsius, so understandably guests want to sit in the comfort of a limousine.

Each guest has specific needs and specific setup requirements, which means everything needs to be changed in a very short timeframe — this is very challenging.

WEF participants expect that everything is in place when they arrive. There are so many different dietary and special requirements for each guest. Last year, when the conference was in May, the forum was a little more down-to-earth, so people wouldn’t ask for crazy things and there was maybe less exclusivity when it came to food and beverages.

A French public-relations company manages our room inventory on behalf of the WEF, selling the rooms to companies and individual guests for us, so we don’t really know who’s staying at our hotel until the very last moment. The rooms are probably 50% more expensive during this time, but individual prices depend on the type of room. There’s also a five-day minimum length of stay. (Editor’s note: Regular room prices at the Steigenberger Icon Grandhotel Belvédère typically range from $325 to $670 a night.)

Most of our staff is excited for the WEF

It’s so interesting to see all of these people — actors, musicians, politicians, business people, people you’d have never dreamed of coming across. It’s really an interesting melting pot. So whoever comes to work here very much looks forward to coming back and joining our team each year, but it’s tough work.

All of the staff members stay on-site. Otherwise, it would be impossible to get everything done. We have a staff house, but we’ve placed additional beds in each and every room. We have up to six staff members sleeping in a room.

The staff hardly gets any sleep, maybe three or four hours a night. A lot of chocolate bars and Redbull help to keep morale up. I get to see the employees with big eyes, and when they finish their work day, they say, “I met him, I met her, I’ve met Angelina Jolie!” Just imagine, you work 16, 17, 18 hours, but you don’t get tired because you’re so excited about it all.

People don’t really get tired until the moment they’re done working, then within seconds, they fall asleep. But when you’re within the process of all that work, you don’t have time to think about it.

The jobs can be competitive and it’s a lot of hiring, but Deutsche Hospitality, which owns the Steigenberger franchise, including this hotel, is a large hospitality group, so we get some staff from our other hotels. During the WEF, our staff makes an hourly wage that’s about 25 to 35% more than their normal salary.

January is a quiet period of the year for most hotels, so it makes it easier to get employees here to Davos because they need the work. I don’t want to talk about specific figures, but the WEF is important to us and to many other companies in Davos.

There really isn’t anything we at the hotel don’t like about the WEF. Just imagine, you have the most important people in the entire world — from politicians to business people and entertainers — you have them all here. Normally, you see them in the newspaper or on TV, but here, they’re all just around the corner.