In a federal courthouse in Brooklyn, New York, on Tuesday, a small group of journalists, mostly from Mexico, gathered in a remote-viewing room. They were there to watch the proceedings down the hall, in the courtroom itself, where the object of their interest would soon appear. The anticipation was palpable as Genaro García Luna, Mexico’s former secretary of public security, the well-connected “architect” of the Mexican side of the drug war, stepped into view of the cameras and onto the television screen before the journalists.

With his white hair, navy suit, and gray tie, García Luna looked every bit of his former job: being a top cop in Mexico. Now, federal prosecutors are accusing him of colluding and collaborating with drug cartels.

The trial holds the potential for explosive revelations about the brutal 16-yearlong drug war in Mexico. Though the proceedings may not receive as much fanfare as that of the notorious kingpin Joaquín “El Chapo” Guzmán, García Luna holds an insider’s knowledge of the conflict in all its unflattering detail, including potential criminal behavior by top Mexican and U.S. officials.

García Luna was the top security official under former President Felipe Calderón, who launched the Mexican drug war in 2006. Fueled by U.S. funds, equipment, and support, the violence has only deepened in Mexico. The conflict has seen some 400,000 people killed, 82,000 have disappeared, and hundreds of thousands displaced.

García Luna, who flaunted his relationship with the U.S., has long been a confidant and right-hand man to Mexican leaders, including former presidents, amassing a collection of Mexican government and U.S. intelligence. At the same time, prosecutors say García Luna worked with the Sinaloa and Beltrán-Leyva cartels by accepting bribes, establishing protection rackets, providing sensitive information, arresting rival cartel members, and helping them traffic drugs into the U.S., in addition to immigration-related charges.

“This just shows the power of organized crime and the futility of the strategy we’ve pursued for the past 40 years.”

García Luna’s defense attorneys deny any wrongdoing by their client. At the close of the first day of jury selection, one of the lawyers told reporters outside the court that García Luna had not been offered a deal by the U.S. government and that they would continue with the trial: “There’s been no offers, there’s been no deals. We’re not interested unless they want to dismiss the charges,” said César de Castro, García Luna’s lead attorney.

For close observers of Mexico, García Luna’s trial could provide not only a glimpse into the inner workings of the failed drug war, but also some high-level accountability — a vanishingly rare occurrence for the many families touched by the war’s violence.

“This just shows the power of organized crime and the futility of the strategy we’ve pursued for the past 40 years,” said Adam Isacson, the director for defense oversight at the Washington Office on Latin America. “The only way there would be justice for the victims is if not just García Luna, but an entire class of corrupt Mexican and perhaps U.S. political and law enforcement leaders get named and have charges filed against them.” 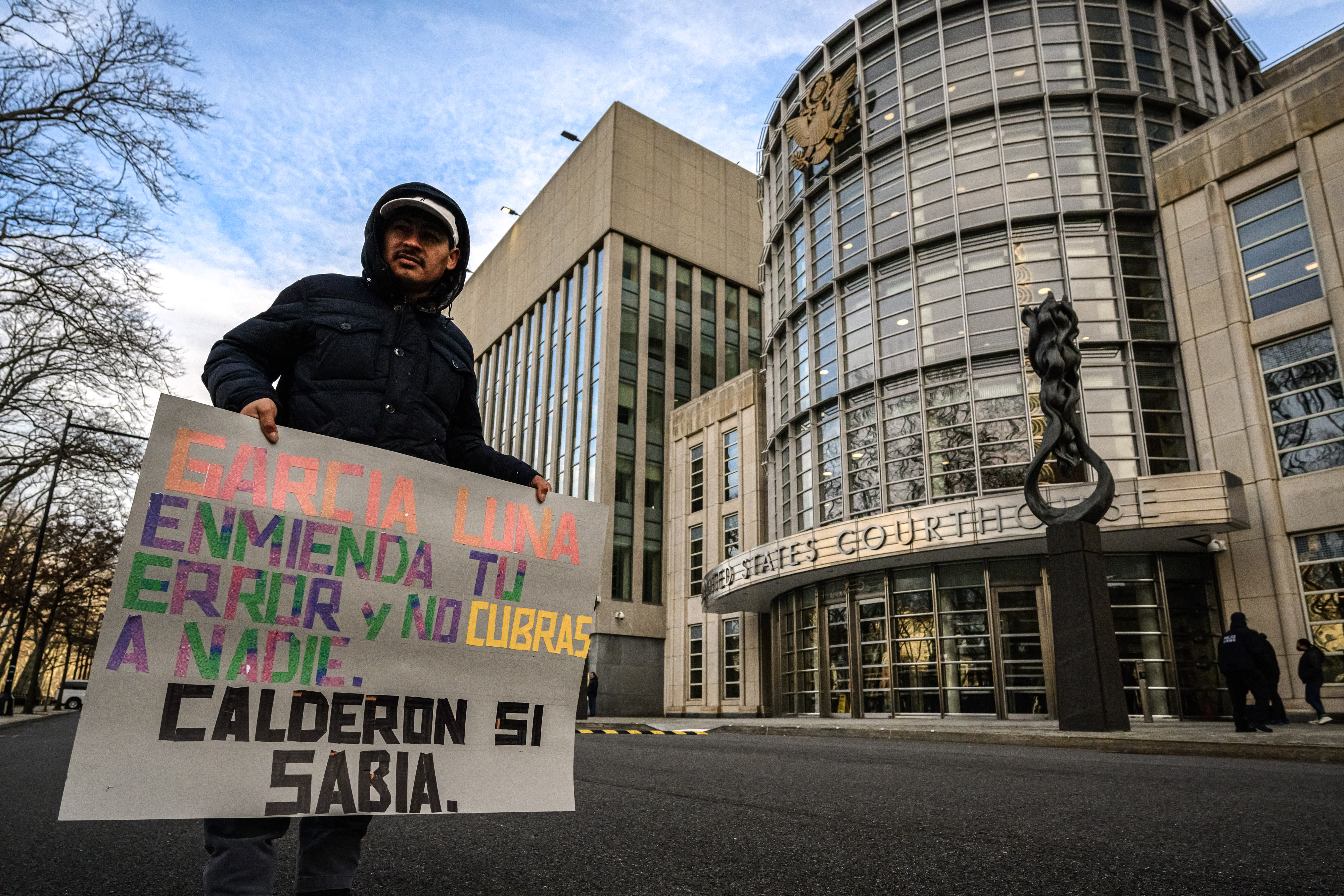 A protester holds a sign reading “García Luna make amends for your mistake and do not cover for anyone. Calderon did know,” during jury selection ahead of the trial of former Mexican Secretary of Public Security Genaro García Luna, in the Brooklyn, N.Y., on Jan. 17, 2023.

Before taking his seat in the presidential cabinet, García Luna began his law enforcement career in 1989 at the Center for Investigation and National Security, an agency created with the help of the CIA. He worked in counterterror and counterinsurgency before joining the Federal Preventive Police in 1999, where he grew close to the inner circle of newly elected President Vicente Fox.

A year later, Fox dissolved the Federal Preventive Police and replaced it with the Federal Investigation Agency, or AFI, with García Luna at the head. The AFI, modeled after the FBI and Drug Enforcement Administration, had a budget in the millions. At his new perch, García Luna showed a flare for the dramatic: Some AFI operations were broadcast on live television. In one instance, after a high-profile kidnapping rescue, an AFI official gave the victim a t-shirt to wear that read “THANK YOU AFI.”

In 2006, when the right-wing President Felipe Calderón assumed office, García Luna was again promoted, this time appointed secretary of public security. He was now Mexico’s top law enforcement official and Calderón’s closest confidant. He oversaw the country’s prisons and a sprawling intelligence-gathering network. In short order, Calderón launched the drug war and García Luna sent the Federal Police and military into the streets.

His roles in security brought García Luna into close contact with his U.S. counterparts. Robert Mueller, Eric Holder, Hillary Clinton, and others were all on his meeting agenda. As The Intercept previously reported, U.S. State Department cables called García Luna a “trusted liaison, partner and friend of the FBI.” Another cable outlines a meeting between John Brennan, who would later become director of the CIA, and García Luna: “Garcia Luna expressed his appreciation for President Calderon’s undivided commitment to fighting organized crime and his satisfaction with U.S.-Mexican cooperation, suggesting if both sides held firm we would see a reduction in violence.”

“Having someone like García Luna is extraordinarily beneficial, and they” — U.S. officials — “were not going to stop having the benefit of that huge open door just because the guy was most likely taking money, or extorting money, out of traffickers and committing all kinds of crimes,” said Oswaldo Zavala, a journalist and professor at the City University of New York.

Prosecutors have asked the court to reject evidence “depicting meetings between him and senior U.S. government officials.” They’ve also asked that there be no mention of Salvador Cienfuegos Zepeda, the former Mexican secretary of national defense who was arrested by the U.S. in 2019 but whose charges were later dropped in a diplomatic scandal that shook the U.S.-Mexico security relationship.

García Luna denied the accusations, threatening to sue El Rey for defamation. He tweeted old pictures of himself with Hillary Clinton, who at the time was secretary of state, and other U.S. officials.

The allegations against García Luna in El Chapo’s trial were only the most recent. For close to two decades, Mexican journalists have published books and investigations, exposing the alleged links between García Luna and organized crime. As secretary of public security, García Luna was also the subject of multiple investigations by Mexican officials.

Meanwhile, calamity tended to befall those who could potentially damage García Luna’s standing. Two officials who began probing his alleged links with the Sinaloa cartel died in an airplane crash in 2008. That same year, Javier Herrera Valles, a top Federal Police official, wrote Felipe Calderón a letter accusing García Luna of ties to organized crime. Herrera Valles was arrested shortly thereafter on unsubstantiated charges that he was working with the Sinaloa cartel and tortured in prison. He was exonerated and released in 2012.

With a change in presidential administration in 2012, García Luna left Mexico for Miami, where he lived a lavish lifestyle. He established a security consulting company called GL & Associates Consulting, or GLAC. Former law enforcement officers served on the board of GLAC, including Jose Rodriguez, the former top CIA official who ordered the destruction of CIA torture tapes. In December 2019, García Luna was arrested in Texas. (García Luna’s lawyers said in court filings that he made his wealth through legitimate means after arriving in the U.S.)

With his drug war machinations, close relationships with top officials from both sides of the border, and contacts with a raft of drug cartel operatives, García Luna left in his wake a host of potential witnesses against him. Many are themselves narcos who were arrested and turned on the cartels, such as Edgar “La Barbie” Valdez Villarreal, who wrote in a 2012 public letter that García Luna had taken bribes.

According to previously sealed sentencing records, first reported by Aristegui Noticias and reviewed by The Intercept, between 2008 and 2010, La Barbie, who found Christianity after his arrest, fed information to the DEA, the FBI, and U.S. Immigration and Customs Enforcement, as well as “possibly communications with intelligence services in the United States.” Little is known of what La Barbie fed U.S. officials. His contact with the American agencies suggests the U.S. government may have known of the allegations against García Luna a decade before his indictment.

“This is all guesswork,” said Isacson, of the Washington Office on Latin America. “I suspect that the DEA may have still found him useful for some things. You have several cartels in Mexico and some of them are clearly not working with García Luna — a sort of ‘enemy of my enemy’ situation.”

Other narco witnesses expected to testify include Sergio “El Grande” Barragan, a former lieutenant for the Beltran-Leyva Organization, and Ivan “La Reina” Reyes Arzate, a Federal Police officer with close ties to the DEA, who was sentenced for feeding information to organized crime.

The DEA and the CIA referred all questions about García Luna to federal prosecutors. The Justice Department declined to comment. ICE and the FBI did not immediately respond to requests.

“If he becomes the scapegoat for everything wrong with Mexico’s system and the rise of organized crime in Mexico, then they’re doing it wrong.”

The Mexican government, under the administration of President Andrés Manuel López Obrador, launched its own investigations into García Luna. In 2021, the government filed a lawsuit against the former security chief, his wife, and several associates, alleging that they stole $250 million in contracts with the government and laundered the money. (His defense lawyers in the Brooklyn case asked the court not to allow any evidence related to García Luna’s post-2012 life in Florida, saying it’s irrelevant to the charges.)

Last June, the Mexican government obtained its own arrest warrant for García Luna, alleging association with criminal groups and illicit enrichment. The arrest warrant included charges of illegal arms trafficking related to Fast and Furious, the botched operation in which the U.S. government attempted, but failed, to track firearms sold to Mexican organized crime. In December, during a presidential morning briefing, a top security official presented a slideshow describing who García Luna allegedly conspired with during his time in office.

Whether García Luna’s trial will implicate top Mexican or U.S. government officials remains to be seen. Critics of the drug war worry that if the focus remains narrowly on García Luna, the larger import of holding him to account will be missed, even as the conflict continues to become more militarized and the death toll mounts.

“He’s clearly the tip of a much larger iceberg,” said Isacson. “But if he becomes the scapegoat for everything wrong with Mexico’s system and the rise of organized crime in Mexico, then they’re doing it wrong.”

As Zavala, the CUNY professor, put it, “This is much more horrible, much more endless, much more difficult to stop than just one guy in a high office taking some bribes.”

The post Mexico’s Former Top Cop Is on Trial in New York. Will the U.S. Be Implicated? appeared first on The Intercept.