The Bank of Japan on Wednesday maintained ultra-low interest rates, including a bond yield cap it was struggling to defend, defying market expectations it would phase out its massive stimulus programme in the wake of rising inflationary pressure.

The surprise decision sent the yen skidding against other currencies as investors unwound bets they made anticipating the central bank would overhaul its yield control policy.

At a two-day policy meeting, the BOJ kept intact its yield curve control (YCC) targets, set at -0.1% for short-term interest rates and around 0% for the 10-year yield, by a unanimous vote.

The central bank also made no change to its guidance that allows the 10-year bond yield to move 50 basis points either side of its 0% target.

In a sign of its resolve to keep defending the cap, the BOJ beefed up a key market operation tool to more effectively curb rises in long-term interest rates.

“Widening the yield band or dismantling YCC now would have made the BOJ even more vulnerable to market attack,” said Izuru Kato, chief economist at Totan Research.

“By showing its resolve to use market tools more flexibly, the BOJ wanted to signal to markets it won’t make big monetary policy changes under Governor Haruhiko Kuroda.”

The decision follows the BOJ’s surprise move last month to double the yield band, a tweak that analysts say has failed to correct market distortions caused by its heavy bond buying.

Since December’s action, the BOJ has faced the biggest test to its YCC policy since its introduction in 2016 as rising inflation and the prospects of higher wages gave traders an excuse to attack the central bank’s yield cap with aggressive bond selling.

Kuroda has repeatedly said the BOJ was in no rush to dial back stimulus, let alone raise interest rates, until wages rise enough to boost household income and consumption, allowing firms to lift prices.

In a quarterly report released on Wednesday, the BOJ raised its core consumer inflation forecast for the current fiscal year ending in March to 3.0%, from 2.9% projected in October.

It also revised up the inflation forecast for the fiscal year ending March 2024 to 1.8%, from 1.6% seen three months ago.

But the inflation forecast for fiscal 2023 was maintained at 1.6%, a sign the board is sticking to the view prices will moderate as the effect of past surges in raw material costs dissipate.

The BOJ also slashed its economic growth projections for fiscal 2023 and 2024, amid worries slowing global growth will weigh on the export-reliant economy.

Data due out on Friday is likely to show inflation hit a fresh 41-year high of 4.0% in December, according to a Reuters poll, although analysts expect price growth to moderate later this year reflecting recent declines in global commodity prices. 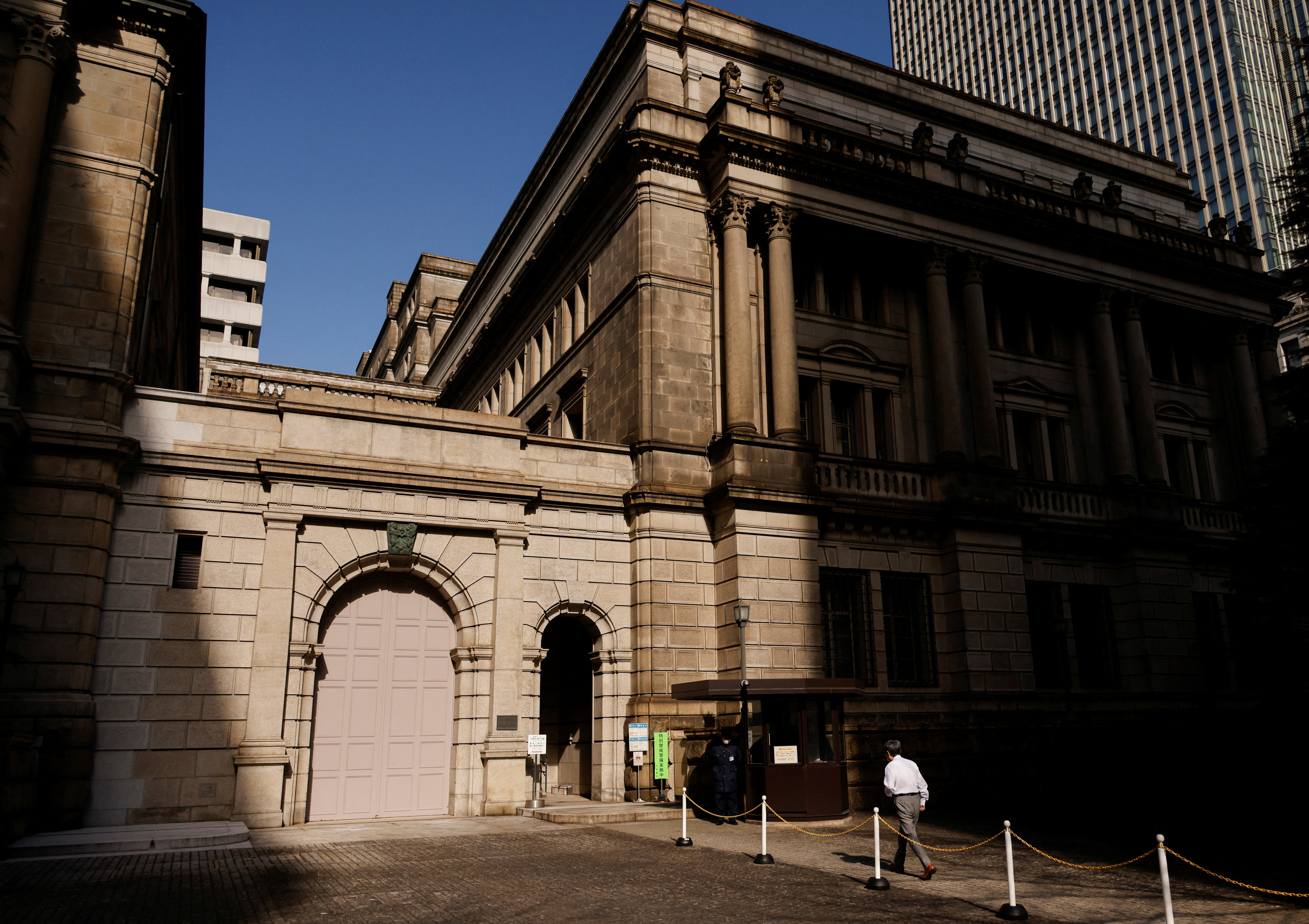 A man walks at the headquarters of Bank of Japan in Tokyo, Japan, January 18, 2023. REUTERS/Issei Kato 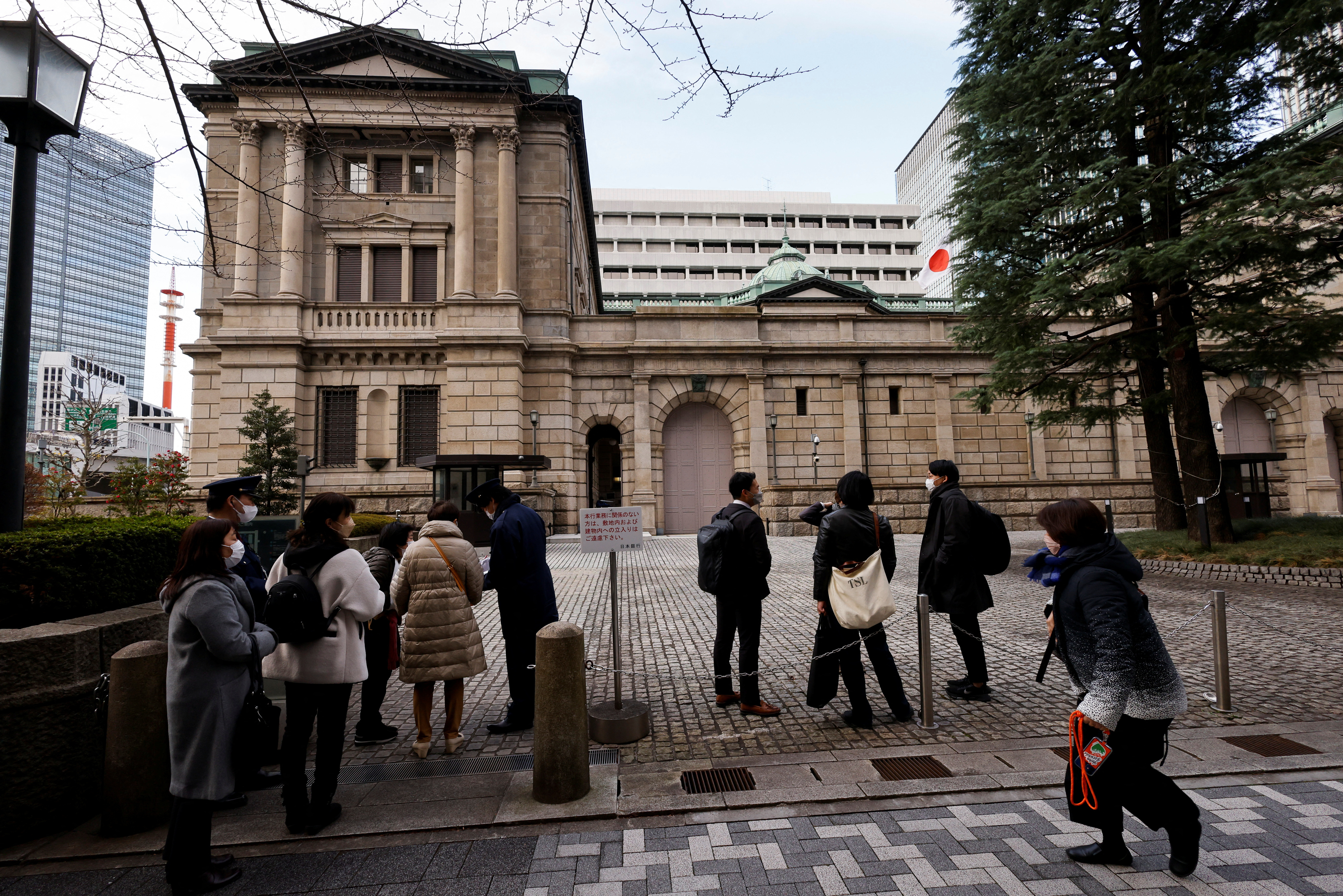 Visitors are seen at the headquarters of Bank of Japan in Tokyo, Japan, January 17, 2023. REUTERS/Issei Kato