‘What doors will open?’: Hope in Singapore ahead of gay sex decriminalization  La Prensa Latina Pride and Less Prejudice’s virtual action this weekend aims to raise $10,000 to send 800 LGBTQ-inclusive books to elementary schools across the U.S. and Canada. 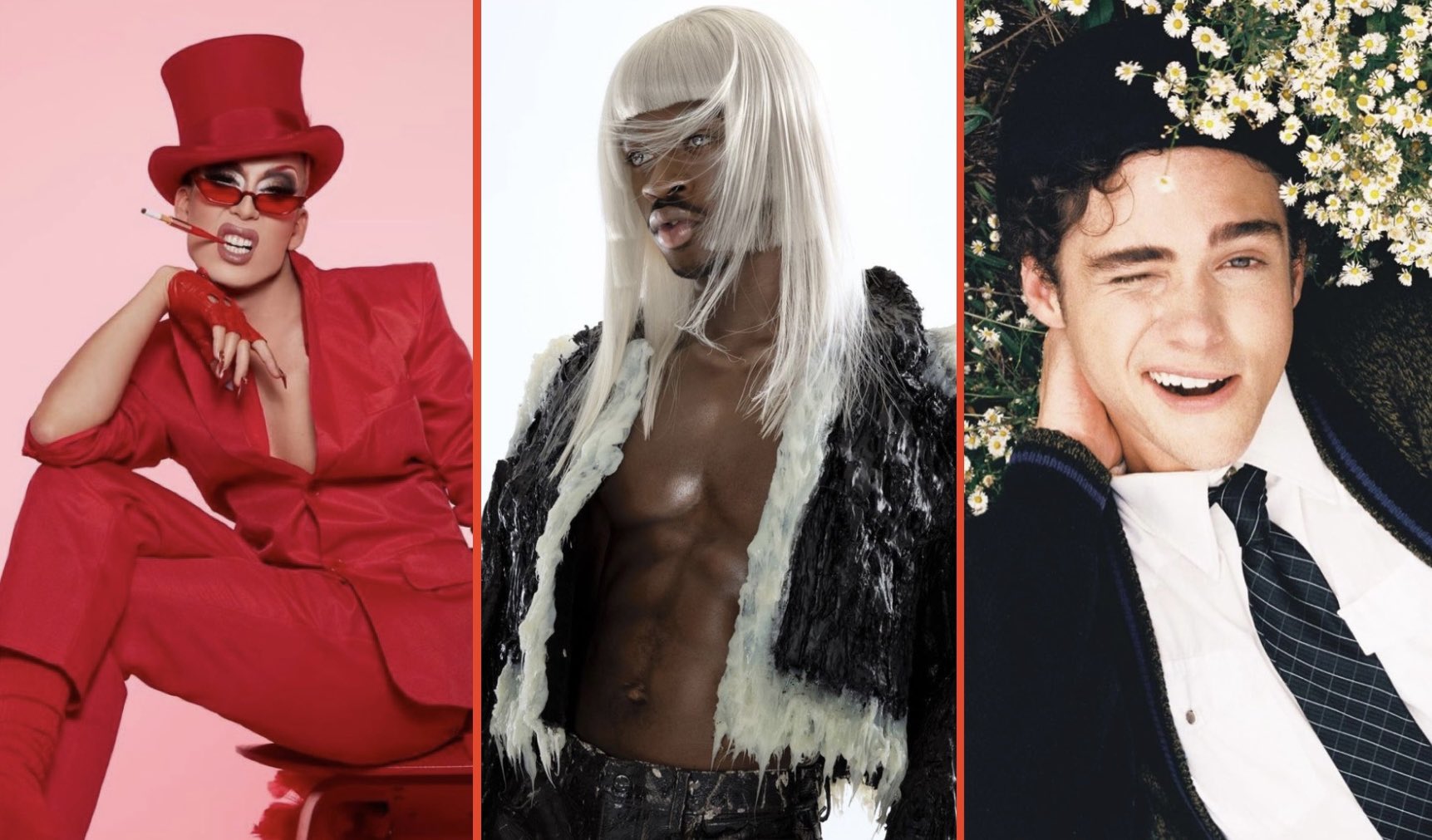 Welcome to the weekend, readers! Time to leave your worries behind and just chill out. Monday-you can deal with those.

It’s been a revealing week! The boys in particular have really been opening up: Greyson Chance opened up about his time with Ellen, Colton Haynes opened up and let the girls breathe, and Adam Levine… well, he didn’t open up voluntarily, but it’s surely all hanging out now.

The guys in music have been putting it all out there this week, too. Some with confessional lyrical stylings, and some by just putting on their Saturday shoes and cutting footloose.

However much League of Legends paid for this partnership/endorsement/collaboration, Lil Nas X deserves a lil tip. He’s had that “Been that ***** since I came out my mama” snippet running the TikTok sound arena for weeks, and for good reason. Even with the price tag hanging off the track, when it slaps, it slaps. Those little League nerds better go crazy when he plays this at the Worlds open later this month.

Ace of Base? All red everything? Bosco’s whole entire posterior out? Alaska came on this video set ready to check boxes we didn’t even know were on the list. It turns out that dragging this song up meant putting a lot more bass in that Ace, and it works. Alaska’s reclamation of ’90s and y2k sounds throughout her new Red 4 Filth album are so effective at spinning periods of queer suppression into ones of celebration, and having her Drag Race sister gyrate to this thumping beat certainly fits the bill.

“Sad Songs in a Hotel Room” by Joshua Bassett

You know, we as gay people, we get to choose to call a mid-tempo ballad a bop, especially when it’s coming from this egregiously charming little Disney prince. Between a teen divorce album, health problems, and a weirdly received coming out moment, Mr. Bassett has been taking it these past couple years. As much as this song and the EP of the same name share in that melancholy, they also sound like an acceptance, a breathing out. Very “you get to exhale now, Simon” teas. There’s not an exact closure in this titular song, but its head-bobbing reminiscence makes for a good listen.

“Faith in Me” by David Archuleta

David Archuleta went through his Therapy Sessions, then through his coming out, and now seems ready to just cut loose and have some fun. The track is full of feel-good danceability, and the video is serving cute teen movie complete with Breakfast Club dance moves in 10 Things I Hate About You football stands. The fact that it’s directed by Kevin McHale and former NLT bandmate Justin Thorne just adds an extra layer of cute guy spice to it all. Also, the cuffed jeans and high tops? Fully realized bisexuality right there.

“In My Head” performed by Joe Serafini & Andrew Barth Feldman

It was a tumultuous process deciding whether to include a double dose of HSM:TM:TS cast member songs on this list or not. Then I realized that this duet actually constitutes a triple dose, which therefore makes it all even out. PEMDAS or something, I’m not a scientist.

Anyways, this is the sweetest pop broadway mutual gay crush tune you’ll hear for a minute. Writers Smith & Mertzlufft are offering a balm to everyone who heard “For Forever” and thought for just a moment that Dear Evan Hansen would be cute and fruity, and the adorable vocalists did what needed to be done. A little ambitiously melismatic towards the end, but who would fault tenors for being tenors?

Join us back here next week for another bop after bop! Seeking gay sex has evolved from public restrooms of the past to a metaverse future. Will shifting attitudes toward sexual expression mean the elimination of office code of conduct rules?

Church states that he wants the bottles to “feel like an art piece, something you can drink and keep on your mantelpiece afterward.

Spain is showing the world its Bussí, and Gay Twitter™ is losing it  Queerty 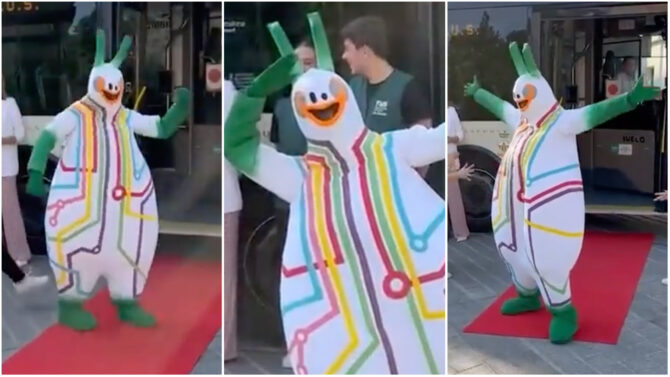 This week, Spain’s transit system Sabadell has unveiled a new mascot, and it’s… well… it’s sort of rabbit-like? Or maybe it’s an anthropomorphic onion? What’s green and white and has maps all over? We honestly don’t know what to call it!

But we can say, with confidence, that it is a mascot—one with a rather unfortunate name: La Bussí.

Back in Spain, the character’s strange design has been met with confusion and derision. On the internet, however, La Bussí is already being embraced by the gays, and it’s all thanks to that name.

The stanning began earlier today when La Bussí’s dancing debut on Sabadell’s TikTok made its way to Twitter. Barcelona-based author Huw Lemmey shared the clip, clearly aware their followers would get a kick out of the confounding mascot:

I thought you all might like to know that, here in Spain, Sabadell’s bus service has unveiled its new mascot – Bussi pic.twitter.com/BFlXkzO8MS

“Bussí,” of course, looks and sounds and awful lot like “bussy”—the English-language slang for “boy p*ssy,” per Urban Dictionary. According to the president of Sabadell, the name’s meant to be a portmanteau of the Spanish words for “bus” and “yes,” as in: Bus + sí = Bussí!

But, you know, once “bussy” gets in your head it’s hard to think of anything else…

Related: His mom asked what a “bussy” was, what happened next was kinda awkward

While one has to acknowledge that the term likely hasn’t caught on with Spain’s queer community in the same way it has stateside, Lemmey followed up their tweet saying what we were all thinking:

Today in “what the hell do you not employ a single gay person in your whole damn company?”

In any event, the original tweet—with 55k+ likes and counting—has made La Bussí an immediate queer icon. Gay Twitter

has already adopted the mascot as one of their own, coming in hot with the jokes:

her: she’s probably thinking about other women

not to derail my fellow ? s from DWD discourse but spain would like you to see its bussi https://t.co/nrmkywfX0P

I’m only upset they didn’t have it opening a bottle of champagne so I could say “That Bussi is poppin” https://t.co/lxOVM5Zr7g

And a subsection of La Bussí’s new fans are shipping it with our other favorite mystery of a mascot, Gritty (who’s having a big week thanks to their appearance in Abbott Elementary‘s second season premiere):

Bussi and Gritty are boyfriends. https://t.co/jTiReXXZla

La Bussi and Gritty are in a queer open marriage https://t.co/tENlkeAz7F

For others, La Bussí is simply a reminder of some of our other favorite ill-advised ad campaigns over the years…

“Bussi” is the most ill-advised public transit promotion since the CTA’s “Come run a train on Chicago” campaign https://t.co/hngdBfddUA

that said I would like Amazon to re-up its Show Hole campaign from a few years ago pic.twitter.com/ncPRGvuTYh

Welcome to the family, La Bussí!