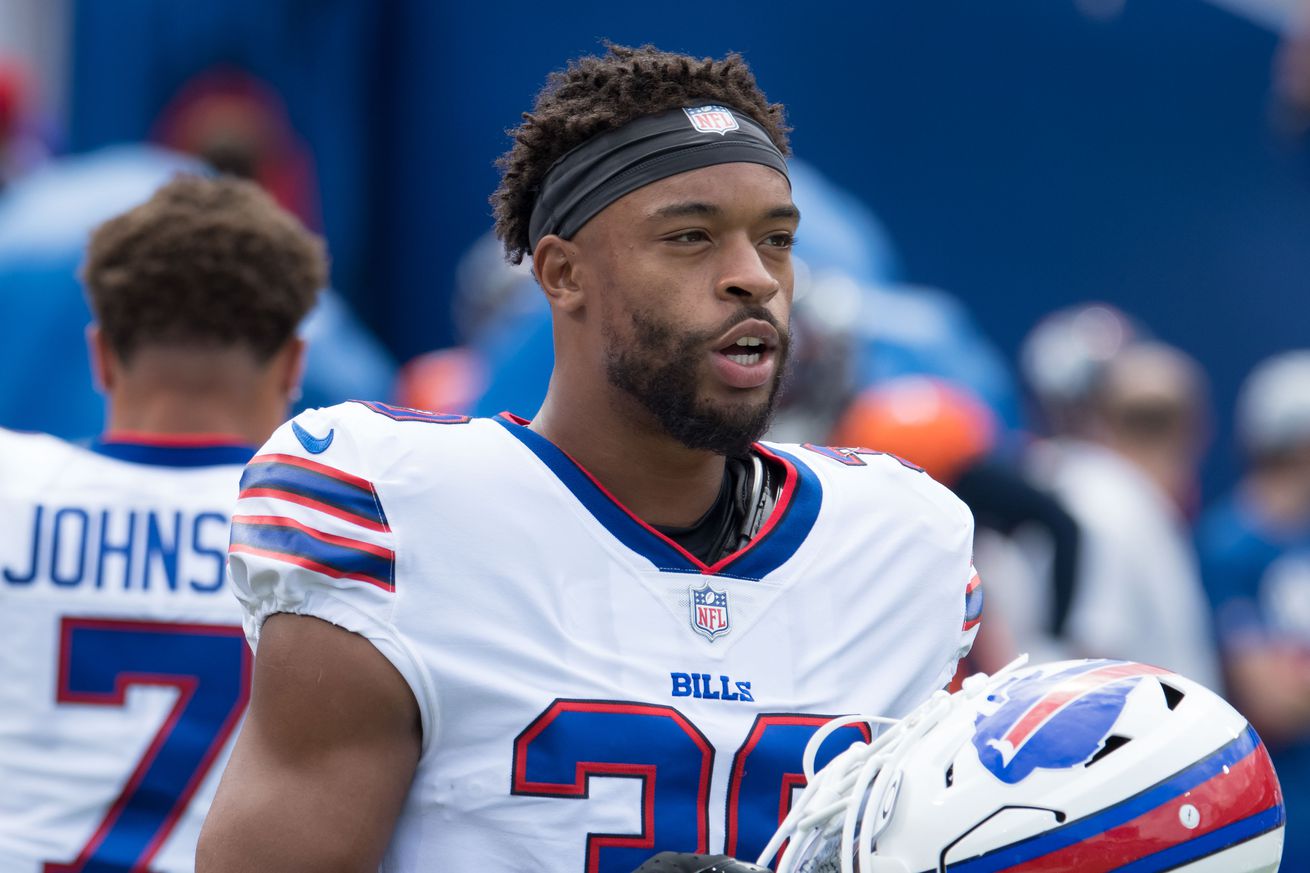 Jackson to undergo testing but has full movement in extremities

The play came near the end of the first half in the game between the Bills and the Tennessee Titans. During the play, Jackson was in coverage on rookie wide receiver Treylon Burks, as the receiver ran a route breaking back towards the quarterback. As the throw came towards Burks, Jackson drives towards the catch point to break up the throw. As the pass falls incomplete, Edmunds breaks on the throw as well, and collides with Jackson:

Dane Jackson had to leave tonight’s game via ambulance after taking this hit pic.twitter.com/b8onIHCnUF

Following the collision, the entire Bills team surrounded their teammate as medical personnel responded to his injury. An ambulance came onto the field for Jackson, and the defensive back was placed on a backboard with his neck immobilized:

The entire #Bills team is on the field for Dane Jackson, whose head and neck were bent back in an awkward, violent collision with a teammate. pic.twitter.com/9bLC696IHr

According to Maddy Glab, who covers the Bills for the team’s media department, Jackson was seen moving his legs after the hit:

.@SalSports reports he did see Dane Jackson moving his legs, which is good news #Bills

The Bills released a brief update on social media, indicating that Jackson was taken to Erie County Medical Center to undergo testing and evaluation for a “neck injury.” The statement also indicated that Jackson had “full movement” in his extremities:

CB Dane Jackson has been taken to ECMC for evaluation of a neck injury. He will be getting a CT scan and an x-ray. Jackson has full movement in extremities.

We will have further updates on this story as Jackson is evaluated. 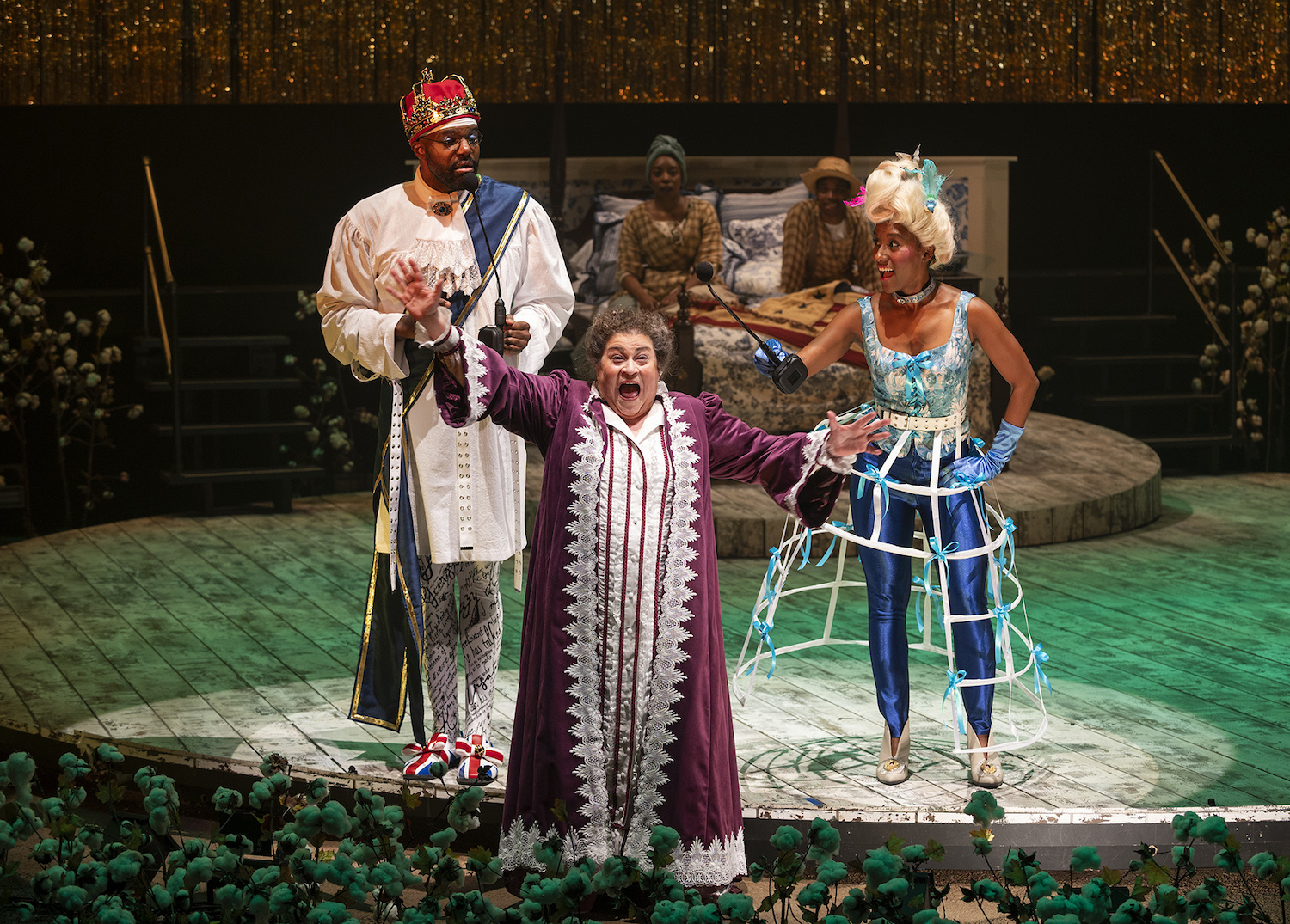 The cast of ‘The Most Spectacularly Lamentable Trial of Miz Martha Washington.’ Photo by Michael Brosilow

Welcome to Curtain Call, our mostly queer take on the latest openings on Broadway and beyond.

A renewed interest in our country’s formative years unearths itself on stages across the country. Broadway soon welcomes an all-female/nonbinary production of 1776, the Tony Award-winning musical about our founding fathers reimagined through the creative lens of co-directors Diana Paulus and Jeffery L. Page. And in Chicago, Steppenwolf presents playwright James Ijames’ The Most Spectacularly Lamentable Trial of Miz Martha Washington, a takedown of the original first lady as seen through a time-jumping kaleidoscope.

Ijames spent eight years working at Philadelphia’s National Constitution Center, and it was here that he first gained interest in Washington’s relationship with her slaves. While the president declared the manumission of his slaves upon his death, Martha made no such promise of those part of her dower share — 84 inherited slaves from her first husband Daniel Park Custis.

“I found a letter between Abigail Adams and Mary Cranch where they were discussing that Martha thought that her slaves were trying to kill her,” Ijames said. “And I was like, ‘That’s spicy.’ And I thought that would make a good play.”

No Tea, No Shade: 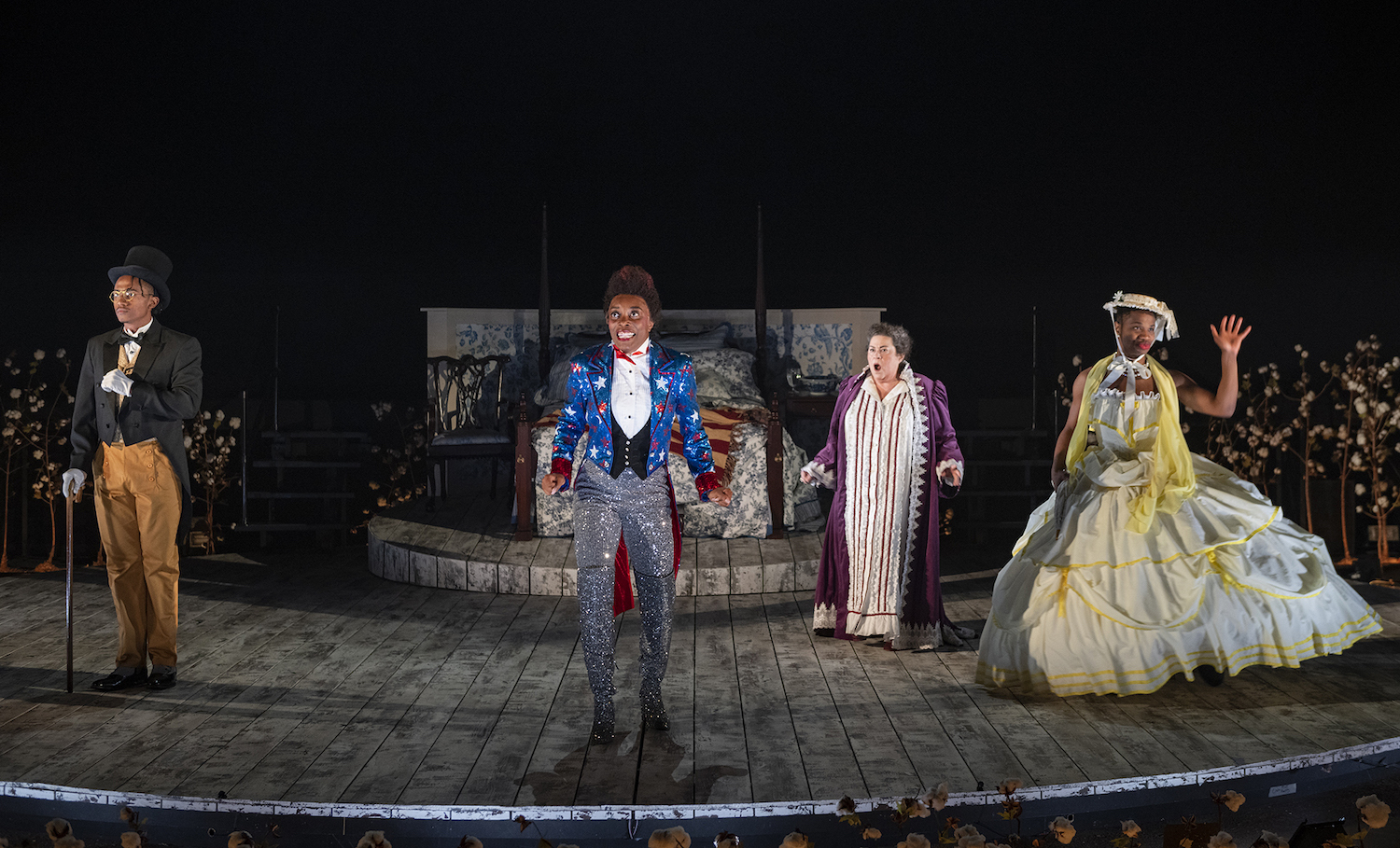 A two-dimensional façade of Mount Vernon rises at the beginning of Miz Martha to reveal the first lady (Cindy Gold) with a hacking cough, attended to by Ann Dandridge (Nikki Crawford) — both slave and half-sister. The cringe-worthy revelation is one of many resonating moments as the dynamic ensemble reveals the multitudinous layers of systemic racism baked into our country’s DNA. White folks may draw comparisons to Dickens’ A Christmas Carol, but Ijames uses the form, not as a morality play but rather to dismantle our whitewashed history.

“The moment Martha enters a dream, I felt I could do whatever I wanted,” Ijames said. “I’m a true disciple of Suzan Lori Parks and the sense that the American mythos is up for dismantling as a Black artist. Like, it’s actually my responsibility to go, ‘Yeah… we’re gonna break this up a little bit.’”

“Martha was a pimp. She had like three hundred cats working for her for free man. Picking all that cotton…for…free. She was all like ‘Slaves betta have my cotton!’ Pimpin’ your honor.” — The Most Spectacularly Lamentable Trial of Miz Martha Washington

Director Whitney White keeps the intermissionless pace brisk, employing stepping and other percussive moments, along with Ijames’ scripted laughter, which is “not light or fun,” according to the playwright’s notes. “It’s more like showing one’s teeth. Especially in the case of the slaves. Their laughter is hostile. Loud! Laughter is a weapon.”

When George Washington shows up (a captivating Carl Clemons-Hopkins, Hacks) speaking with a “Southern Urban Dialect” — “think T.I. or André 3000 or CeeLo Green. (If you don’t know them… well…),” as Ijames notes, for a scene straight out of The People’s Court, the ghostly apparition calls it like he sees it:

“Martha was a pimp. She had like three hundred cats working for her for free man. Picking all that cotton…for…free. She was all like ‘Slaves betta have my cotton!’ Pimpin’ your honor.”

It doesn’t take long before the first lady’s true colors reveal themselves. “Let me speak. I’m being treated like a common criminal for what? For bringing you from a horrible savage land into the light of civilization!,” she exclaims. “I have been good! I have been kind! Where would any of you be without me? You Cunning, Resentful, Ungrateful—”

Ijames stops short of the n-word, noting in the script, “Incoming like a bomb…. she’s gonna say the n-word but why actually say it… see where it got Paula Deen.”

Let’s Have a Moment: 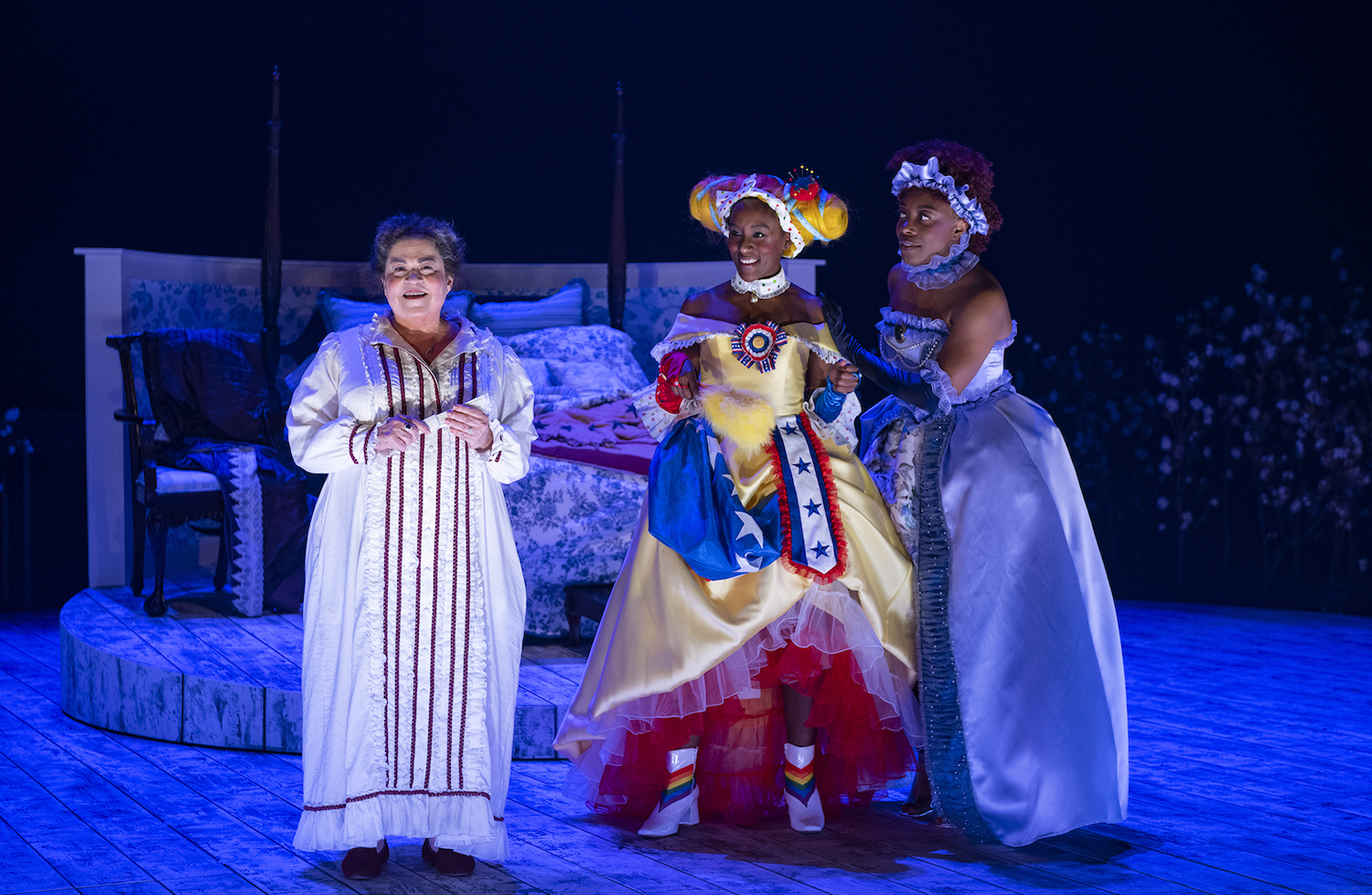 In a precursor to the women’s suffrage movement, Betsy Ross (Celeste M. Cooper) and Abigail Adams (Sydney Charles) present Martha with an opportunity to recognize a parallel between slavery and her own limitations as a woman in a patriarchal society.

“You’re free now! You have permission to do whatever you want!” says Betsy. “What’s that feel like?… to be free?”

“It feels… it feels correct,” says Martha. “It’s the most natural of feelings.” 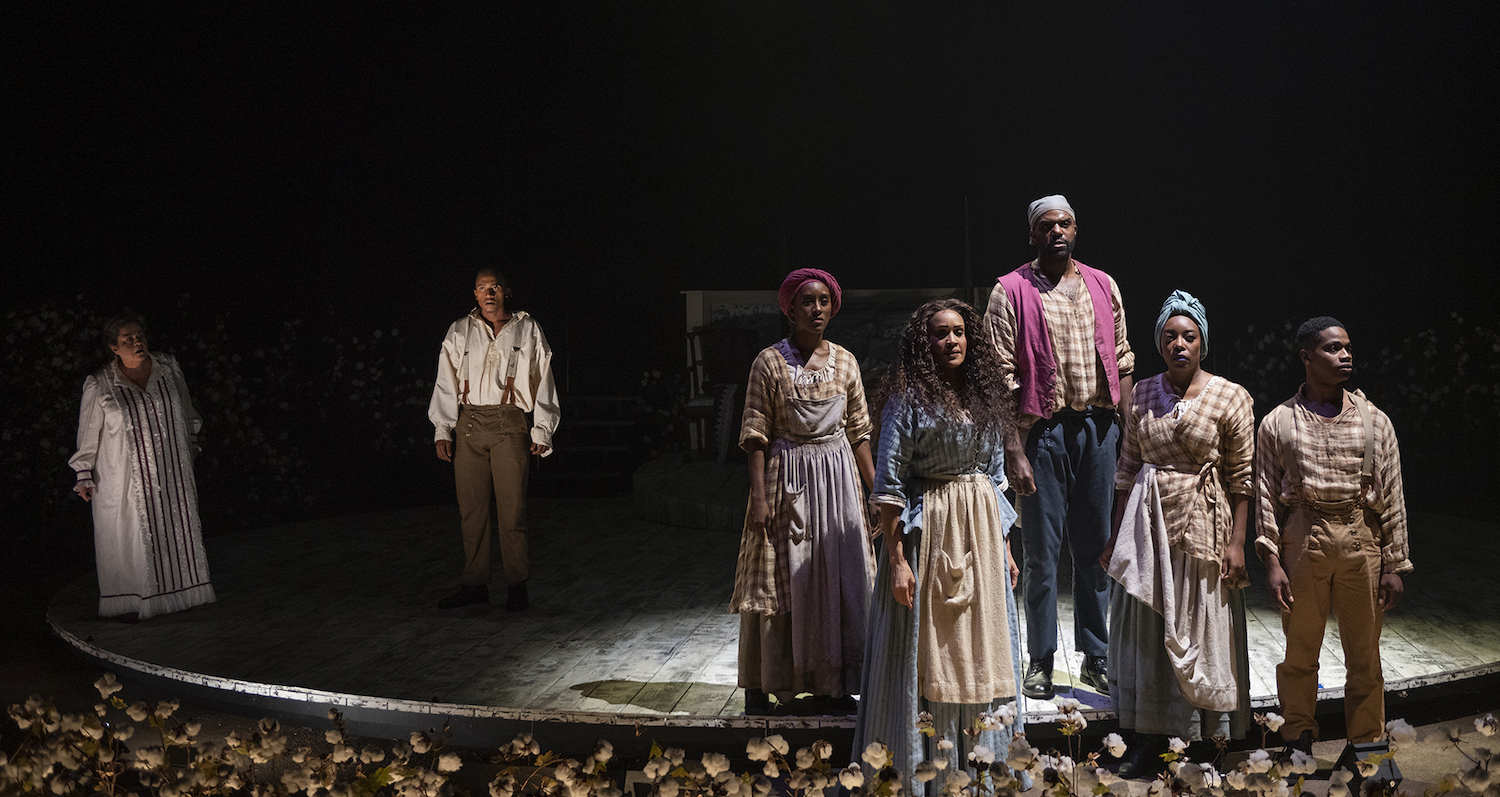 The cast of ‘The Most Spectacularly Lamentable Trial of Miz Martha Washington.’ Photo by Michael Brosilow

As the midterm elections approach, divisiveness looms like a dark cloud. Queer voices — James Ijames among them — provide an opportunity for reflection to transform into action. By subverting stereotypes, the playwright positions the audience in a position of awareness, but how we respond to that awareness is the power of live theater.

“There’s nothing you could do in this space that is incorrect,” says Ijames of one’s theatergoing experience. “Your experience is correct. If you have an emotional response to something, acknowledge it, embrace it, cry, laugh, whatever it is, but never read it is failure and don’t let other people around you frame it as failure.”

“And if there is a moment in which you have a visceral experience of failure, examine that to ask yourself, “What’s actually happening?” If your response is that you feel like you’re doing something wrong by watching something, then there needs to be an examination of that. Where is that coming from? What is the lineage of that feeling?”

The Most Spectacularly Lamentable Trial of Miz Martha Washington plays at Chicago’s Steppenwolf Theatre through October 9, 2022.

King Charles III, accompanied by Queen Consort Camilla, the Prince William with his wife Kate and their children, Prince George and Princess Charlotte, the king’s siblings, Princess Anne, Princes Andrew and Edward, the king’s younger son, Harry, their wives and the extended royal family escorted the coffin into the services and later attended the private interment at the royal vault at St. George’s Chapel in Windsor Castle where the deceased monarch will rest alongside her husband, Prince Philip. 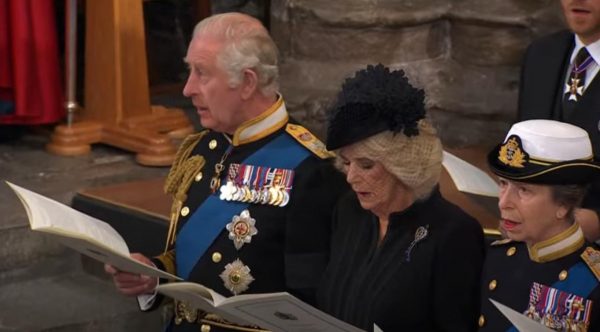 Leaders of most Commonwealth countries attended, with New Zealand Prime Minister Jacinda Ardern and Australian Prime Minister Anthony Albanese making the nearly 24-hour journey from the other side of the globe.

In addition to political and other dignitaries including other European royals attended along with Japanese Emperor Naruhito and Empress Masako. Japanese news outlet Asahi Shimbun reported, citing Imperial Household Agency officials, that a Japanese emperor has only attended the funeral of a foreign head of state or royal family member on one previous occasion, when then-Emperor Akihito attended the funeral of Belgian King Baudouin in 1993.

Spain’s King Felipe VI and his wife Queen Letizia were among the European royals who attended. Former Spanish King Juan Carlos I and former Queen Sofia were be present. The former king is the great-great-grandson of Queen Victoria and a distant cousin of Elizabeth.

Reuters reported that Jordan’s King Abdullah II, who remembered the queen as an “iconic leader” and “beacon of wisdom and principled leadership,” also attended. 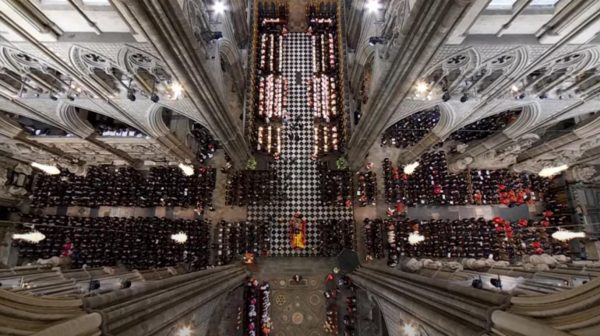 Elizabeth oversaw a significant change in the role of the monarch and the U.K.’s place on the world stage in the 70 years she was on the throne. Reuters noted that the 40th sovereign in a line that traces its lineage back to 1066, Elizabeth came to the throne in 1952 and became Britain’s first post-imperial monarch.

She oversaw her nation trying to carve out a new place in the world, and she was instrumental in the emergence of the Commonwealth of Nations, now a grouping comprising 56 countries.

She guided her government over the administrations of 15 prime ministers starting with Winston Churchill and ending with her asking Truss to form a government as prime minister only a couple of days before her death at Balmoral Castle, her summer home in the Scottish highlands.

In 1952, when she took the throne after the death of her father, King George VI, same-sex sexual relations were criminalized in U.K. The same laws were also brought to the Commonwealth countries that it colonized.

By the time she died, the landscape for LGBTQ rights looked dramatically different — at least in the U.K. — in part because she approved of many pro-LGBTQ measures, such as same-sex marriage. That support has led some to argue that she was a “quiet” supporter of LGBTQ rights, but to others she was just doing her job.

Elizabeth, among other things, pardoned Alan Turing, an acclaimed World War II codebreaker and computer scientist who died by suicide two years after his 1952 conviction for “gross indecency.”

Elizabeth gave royal assent to the Sexual Offenses Act of 1967, which decriminalized consensual same-sex sexual relations among men in England and Wales who are at least 21.

Elizabeth gave royal assent to the marriage equality law that took effect in England and Wales in 2014. Elizabeth has also urged the U.K. to ban so-called conversion therapy.

Don’t play games with me.