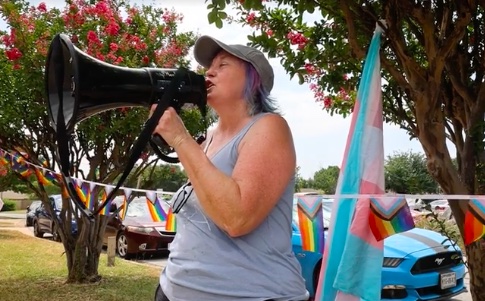 A rainbow chalk drawing in the parking lot of the Stedfast Baptist Church of Watauga, Texas, just north of Fort Worth, bears the words, “No Hate in Texas.”

Nearby, a drag queen dressed in a white body suit, boots, and a rainbow cape flaps a rainbow-colored fan to draw attention to a group of protestors. A string of rainbow flags flap in the wind as protestors carry signs reading, “Love your neighbor as you love yourself” and, “Here against hate. Here against Stedfast.” Another banner facing the road says, “Stedfast Church advocates murder.”

In February, a judge in Hurst, Texas ruled that the church had violated its lease agreement in the town by making threats and creating a dangerous nuisance. The church relocated to Watauga in May 2022, and the town’s queer residents and allies have been protesting ever since to show that their town won’t tolerate the church’s hate.

The church has been certified as a hate group by the Southern Poverty Law Center. During Pride Month, pastor Dillon Awes said, “Every single homosexual in our country should be charged with a crime, the abomination of homosexuality that they have. They should be convicted in a lawful trial. These people should be put to death. They should be lined up against a wall and shot in the back of the head. That’s what God teaches.”

Someone in Awes’ congregation yelled, “That’s right!” Awes has also said that all homosexuals are child rapists and that “sodomites” are responsible for school shootings. The church’s leader, Jonathan Shelley, expressed happiness at someone plowing their car into a crowd of Florida Pride attendees in 2021.

“I cannot believe you expose kids to that garbage,” town resident Mandi Skinner yells in the church parking lot while holding a sign that says, “Pray your hate away.”

Skinner told the Fort Worth Star-Telegram, “He’s calling for people like us to be shot. There’s no way for us not to feel, think, and believe that it’s just a matter of time before someone from that congregation decides to take up arms and do his bidding…. And they’re so close to our home. There’s no way that we can’t be afraid of that. We’re actually considering leaving the entire state. We just want to be somewhere where we can just be who we are unapologetically and feel safe and free.”

Chief Robert Parker of the Watauga Police Department said that his officers have reviewed the church’s sermons on multiple occasions and found that its words are protected by the Constitution’s free speech guarantees because the speakers haven’t issued a specific direct threat actionable from one person to another.

“That’s not freedom of speech,” Skinner disagreed. “That’s vile, threatening, slanderous, dangerous language. And I don’t think it should be protected just because they call themselves a church.”

Skinner is hardly alone in her opposition to the church. Her partner, Theresa Izaguirre, has also joined a protest, holding a colorful sign that says, “Jesus didn’t cast a stone.”

Lynette Sharp — another female Watauga resident, wearing pink, blue, and purple hair — stood in front of a transgender Pride flag during the protest and said into a megaphone directed at the church, “You can pack and get the f*** out of my town…. I know you know you’re hurting your children by being here.”

Sharp spends some of her days handing out flyers to locals and visiting business owners to explain the church’s hateful actions. She wants everyone to know that a certified hate group has moved into their town just across the highway.

“These people are dangerous,” she said. “I think [local residents] at least need to know that they’re there. They’re a cult, that’s what they are.”

The group Veterans for Equality has also joined the protest, as has Pastor Lynn Nichols of the Northside Church of the Nazarene.

“The whole intent (behind the church’s anti-LGBTQ sermons) is incredibly hateful,” Nichols told the Star-Telegram. “This is a public statement… We need to be public in our response.”

Nichols and his congregants said that he has helped coordinate signs and brought food to the protestors to show that all Christians don’t agree with Stedfast.

“We are trying to build bridges into our community,” Nichols said. “We’re trying to make a difference, and it feels like they are trying to burn them down. He’s representing Christ and the word of God that just is inaccurate, and that really ticks me off.”

Stedfast Baptist Church leader Jonathan Shelley wrote in an email to the Star-Telegram that the church doesn’t promote violence or vigilante justice towards anyone. However, the church’s history contradicts that. Shelley himself has said that he “would love it if every fag would die right now.”

Skinner said, “We’re protesting a violent hate group. But the danger of not protesting is just greater. They have to leave, and we have to do our part to help escort them out.”