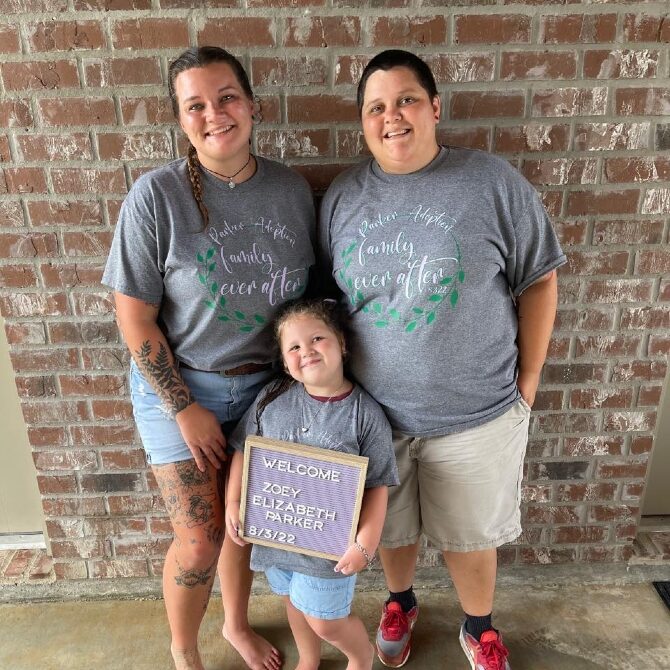 A Baptist school in Louisiana allegedly kicked out one of its kindergarteners after a same-sex couple adopted the little girl.

Zoey Parker, 5, has not had the easiest start to her life. She tragically lost her dad in September 2020 when the 22-year-old died in an industrial accident.

Fortunately, earlier this month, Zoey’s biological aunt and aunt’s wife, Emily and Jennie Parker, adopted her. The family is looking forward to the future together.

However, they suffered a setback last weekend. The gay couple, married since 2016, say a Pastor and the Schools Director at Bible Baptist Academy in DeQuincy, called them in for a meeting.

Zoey had attended pre-K classes at the school and intended to continue with kindergarten there.

However, school officials informed the couple, two days before classes resumed, that little Zoey could not come back. They say the reason he gave was the “lifestyle choices” of her new parents.

“Because of our lifestyle choices, we wouldn’t be a good fit for the school,” Jennie Parker, 31, told NBC.

Emily told local news station KLPC, “The pastor met us in the meeting room and started talking about gender identification and that they teach the words of the Lord and marriage was between a man and a women. They didn’t think this was a good fit.”

Baptist schools explains why little girl had to go

After news of the story broke on local media outlets, the school posted a message on its website. It said:

“At BBA, we are committed to instructing and living in accordance with the teachings of Scripture. We believe that the Bible teaches that every life has value and that there is dignity in all of us because we have been created in the image of God. The Bible also teaches us to love everyone with the love of God despite their personal choices. We strive to teach this to the students who attend. We encourage them to show love and compassion to everyone.

“As a Baptist academy, we are also committed to provide an environment that is consistent with the beliefs that we hold. We want our students to not only know our beliefs, but we want them to see them as well. Regarding personal relationships, we hold that those relationships, whether in dating or in marriage, should be between a man and a woman.”

It went on to say, “There are times where our commitment to upholding our Christian values will not line up with the values of other people. This should not be interpreted that we have any hatred or malice toward them.”

“A big slap in the face”

Emily Parker said she felt humiliated in the meeting.

“We’ve never been confronted so bluntly about our relationship,” she said. “Our love, our marriage, has always felt natural. Our families have always made us feel like we are two people who love each other. This was a big slap in the face.”

Emily explained to OnlySky why she and Jennie had originally placed Zoey in the private Christian school.

“We were completely aware BBA is a Christian Baptist school. [Zoey’s] father died in 2020. She learned that God was taking care of her daddy. That anytime she needed to talk to daddy she could pray. God was her connection to her daddy and we completely supported her.

“We were eager for BBA to help teach her about the God she already loved. Being a private school, we knew what BBA was and were willing to pay the monthly fees to ensure her education and faith. They were so accepting the previous year. We had no idea there would be a problem.”

The Parkers say the experience has not shaken their faith in Christianity.

They also say the number of supportive messages they have received after going public about the school’s treatment of Zoey has overwhelmed them. This included several schools reaching out to them.

Zoey took up a new place at Hamilton Christian School in Lake Charles earlier this week. Emily and Jennie posted photos of her ready to start on her first day at her new school yesterday.