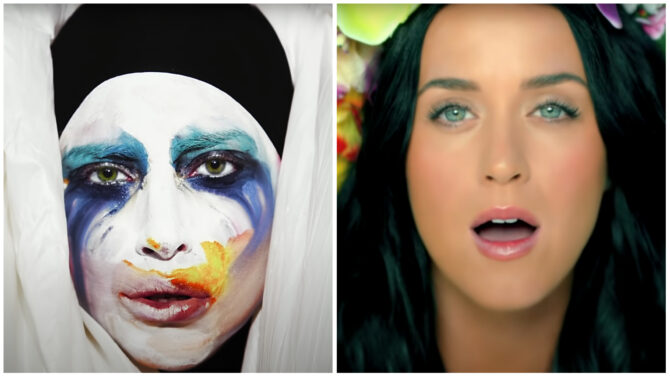 As amateur anthropologists on Twitter have pointed out, today marks the 9-year anniversary of a monumental day in pop culture: It’s the day both Lady Gaga and Katy Perry debuted the lead singles for their third and fourth albums, respectively.

It may seem hyperbolic to call the day “monumental” in retrospect, but the dual releases had the music world buzzing. Two megawatt stars giving us a first taste of their new eras? Both following up massively successful, generation-defining albums? Media outlets covered it with a frenzy, writing of a pop chart “smackdown” and wondering who will win “The Battle Of The Comebacks.”

It was such a moment, that Glee even staged a Gaga/Katy debate of its own in its fifth season!

9 years ago this week, @KatyPerry and @LadyGaga created a pop culture moment with the release of their singles “Roar” and “Applause.” It even inspired an entire episode of ‘Glee’ titled ‘A Katy Or A Gaga.’

Despite the comparisons, the stars showed love to each other on Twitter. pic.twitter.com/BnLR94kC7S

In one corner of the ring was Lady Gaga’s “Applause,” off of her album Artpop. It was her first new single after the smash success of Born This Way, which produced a string of hits and garnered an Album Of The Year nomination at the 2012 Grammys.

Katy Perry had similarly high expectations after her previous LP, Teenage Dream, which also scored an Album Of The Year nod in ’11 and became only the second album in history to have five number-one singles. Her new single “Roar” would be the first indication if Prism could follow suit.

So, how do they stack up? Nine years later, we can see things a little more clearly, so let’s break it down, category by category, and determine once and for all: Which is the better song, Lady Gaga’s “Applause” or Katy Perry’s Roar”?

Jolting you to attention with a wave of sharp synths, “Applause” lets you know pretty immediately that Gaga wants you back on the dance floor. After a string of theatrical pop-rock singles from Born The Way, the track sounds more like her earliest breakthroughs (“Just Dance,” “LoveGame”) albeit through the lens the outré artsiness she’d grown into since. Especially in the verses, Gaga’s singing is bombastic and over-enunciated in a way that seems to pay homage to her idol David Bowie. And, lyrically, it’s pretty straight-forward: Like Tinkerbell, she needs your applause to live. The chorus doesn’t necessarily invite singling along, but you’ll sure as h*ll be clapping to the beat.

On “Roar,” Perry reunites with Teenage Dream songwriter Bonnie McKee (and, unfortunately, Dr. Luke) for a foot-stomping anthem of empowerment. There’s a jangly bit of percussiveness to kick things off for the mid-tempo track that builds to an earworm of a chorus that feels classically Katy. It also feels classically Sara Bareilles because, as many have noted, the track bares a striking resemblance to the singer-songwriter’s “Brave” from earlier that same year. Still, it’s a great fit for Perry’s contralto vocal range, one that, suitably, climaxes with a triumphant roar in its bridge. You can imagine this one was written to be sang in the biggest of arenas.

True to its album title, “Applause” presents Lady Gaga as the main act in a pop art fantasia. Predominantly in stark black-and-white, the clip (from fashion photographers Inez and Vinoodh) makes selective use of color for maximum effect, like the purple projected light that cuts through the darkness. With nods to Botticelli’s “The Birth of Venus,” Andy Warhol, and Jeff Koons, Gaga wears her art-world inspirations on her sleeve. And though it has a few freaky moments that prove disorienting even on re-watch (how about that goose body?), Gaga still absolutely slays with the choreography. Would you expect any less?

“Roar” tells a much more literal story—one supposedly filmed in “Junglescope,” according to the opening title card. We open on a wrecked airplane as Perry and her “boyfriend” (played by model Brian Nagel) stumble around the refuse. After he’s taken out by a tiger, we gradually watch Perry make the most of her surroundings, befriending animals, and becoming a queen of the jungle, complete with a flower throne. Directed by Grady Hall and Mark Kudsi, the video is colorful, campy, and more than a little ridiculous—which we imagine is exactly what Perry was going for, a star known for her winking sense of humor.

“Applause” didn’t get quite the rapturous reception that was expected, with mixed-to-positive reviews pouring in over its first few days of release. Critics appreciated the song as a vessel for Gaga’s naked ambition, as well as its euphoric chorus, but many cited it felt considerably small-scale after the momentous Born This Way. Spin journalist Marc Hogan even went so far as to call it “generic” and “forgettable.” The song peaked at #4 on the Billboard charts in its second week.

The response to “Roar” was similarly mixed-to-positive, although much of the chatter post-release was focused on its similarities to the aforementioned “Brave.” More favorable reviews hailed the song for its infectious spirit and pitch-perfect pop sheen, while the less-than-enthused reactions remarked that the song was steeped in cliches. “Roar” spent some climbing the charts before it reached #1 in September, where it stayed for two weeks of its 33-week run.

In terms of chart performance, it’s undeniably Katy Perry’s “Roar” that came out on top, ranking higher on Billboard than “Applause” and hanging around for longer.

But, nearly a decade on, there’s a quality to “Applause” that still feels fresh and exciting. Where “Roar”—despite being extremely catchy—tends to blend in with other songs and sounds from the era, “Applause” stands out as a thoughtful experiment that never got its proper due. As Gaga said, “pop culture was in art, now art’s in pop culture in me.” Was she ahead of her time with this one? Check back with us as soon as we make sense of those lyrics.