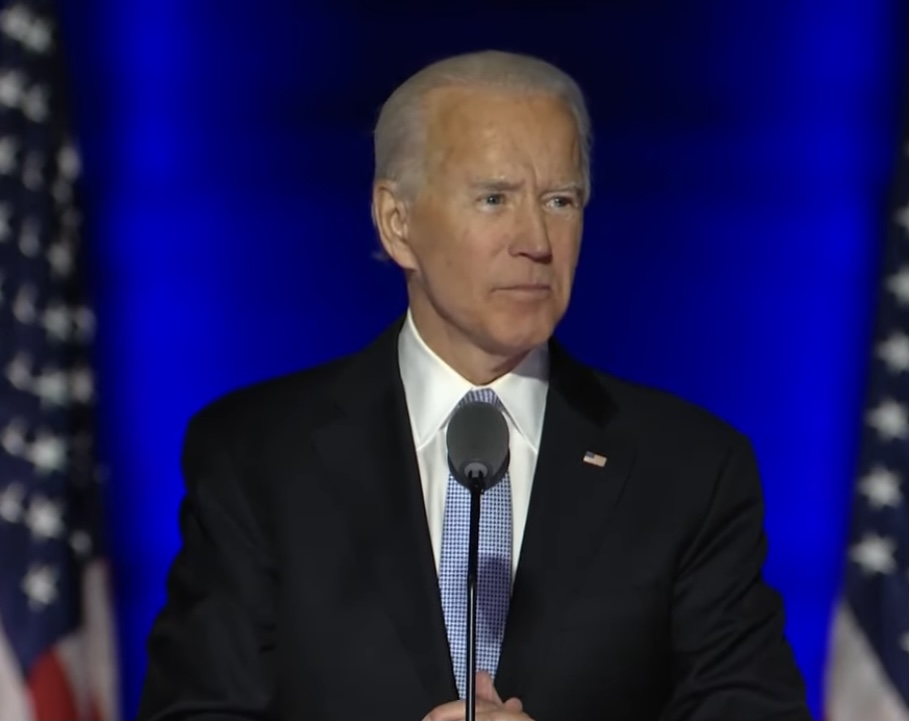 Politico / ScreenshotThe bill is written and the votes are there in both houses. The measure just needs the commitment of the Biden administration to make it a priority.

But she understandably has a limit. Tina recently posted on Facebook: “Okay I need to address something. Posting that I give bad Sherry Pie vibes is problematic. There are victims of that situation that I’m sure aren’t looking to relive that. From the actual parties involved reaching to the effects of the cast and production. I’m all here for a good comparison. From Big Bird, Ronald McDonald, and a sexy hot dog, y’all have kept me laughing. The constant sexual harassment comparisons are just tasteless. If you do better you ain’t gotta get better. Much love and a lot of shade. :)”

Okay I need to address something. Posting that I give bad Sherry pie vibes is problematic. There are victims of that situation that I’m sure aren’t looking to relive that . From the actual parties involved reaching to the effects of the cast and production.

I commented on the post that I would never compare Tina to Sherry Pie. To me, she’s more like Dorian Corey, who had her ex’s corpse mummified in a suitcase for years. Kidding! Tina is so right about the limits of shade, and someday even I will learn that lesson.

In other drag queen news, I am utterly disconsolate about Kim Kardashian and Kanye’s divorce. I’ve lost at least 20 seconds of sleep over it and I hope it doesn’t bring out more circles under my eyes! But I can’t say I’m all that surprised by this development, since Kim had privately told someone I know that Kanye is sort of a lit keg, emotionally speaking. Confided KK, “With Kanye, you never know what person you’re going to get every morning.”

I’m still waiting for the day I wake up and he seems decent.

But those two are as over as celebrity catfishing. More interestingly, there’s a new, hot out lesbian in country—the richly talented Lily Rose—and she made it primarily through self-promotion. Lily’s acoustic song “Villain”—about the weirdness of being labeled the bad guy after a breakup–made it all the way to number five on the U.S. digital sales chart, strictly through her putting it on TikTok and watching it take off like a house aflame.

Lily is an open lesbian (rare in the country world), she has no label, and still, she scored chart points in ALL sales, not just country. Any power-that-be that doesn’t jump on this very soon is a villain. 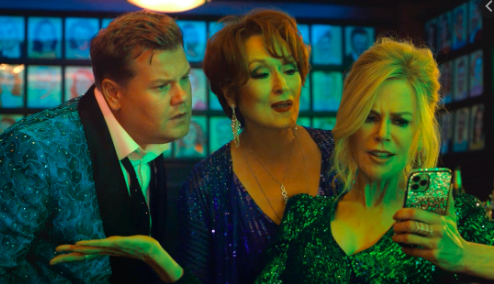 Speaking of hot lesbians: The Prom has a lot of “zazz,” but one line from the movie (and the show it was based on) gets my gay goat. It’s when Barry, the hammy actor who’s hiding a lot of gay pain (played by James Corden), sings about a good review, “It means that this tour de force will not be forced to tour.” The line always felt familiar to me, considering that actor/playwright Charles Busch long ago quipped about “a tour de force that should be forced to tour.” I asked Busch about this perplexing matter and he said, “It’s possible that somebody remembered me saying that–not in a play, but in a curtain speech. But alas, I appropriated the line from a biography of the great actress Mrs. Patrick Campbell. I gladly pass it along.”

Let me pass THIS along: My old pal Lisa Edelstein (House, Girlfriends’ Guide To Divorce) just sold a movie to Viacom and will be directing. Details to follow…Another old club cohort, Pauley Perrette (NCIS), called to catch up. In our long, amazing chat, Pauley said that she never thought club-kid leader/killer Michael Alig was charming or cute and she doesn’t think that Angel Melendez constituted Alig’s entire death toll either. It’s hard to disagree that there might have been other casualties. By the way, there’s been a gofundme started for Alig’s funeral expenses. Some people have suggested the much cheaper option of dismembering the body and tossing it into the river.

BONUS BLIND ITEM: “Which Tony obsessed young playwright has covid and has apparently been super-spreading it?” Such a giver! 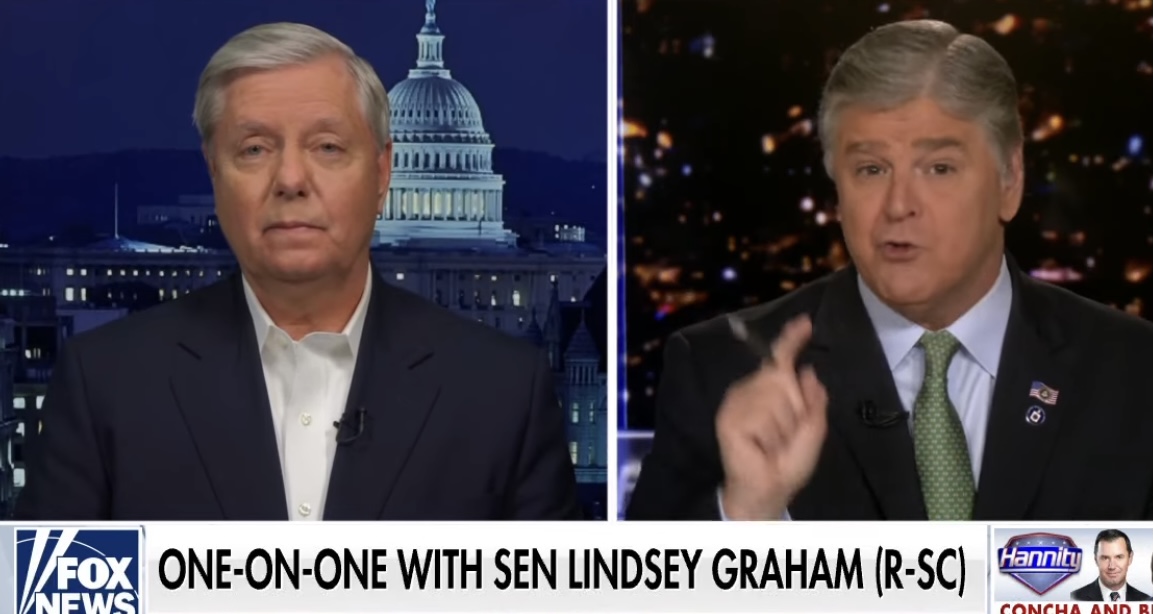 ScreenshotGraham said he was “out” of the Trump world after the riots. But he was back on Hannity, defending Trump from impeachment in a matter of days – even after being heckled by his supporters. 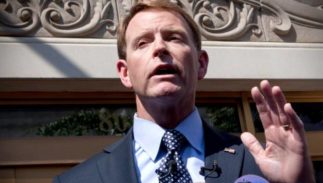 Associated Press/J. Scott ApplewhiteTony Perkins and Jack Hibbs suggest that if there were more prayer in schools and courts, the riot on the Capitol might not have happened.

The result didn’t have the same level of success, though it far surpassed the previous Eszterhas/Verhoeven collaboration in terms of infamy. Showgirls earned some of the worst reviews in movie history, bombed at the box office, and severely damaged the career of all those involved. In particular, Saved By the Bell actress Elizabeth Berkley, who made her debut as a cinematic lead in the film, was branded a no-talent bimbo and tossed by the Hollywood wayside.

Today, of course, audiences have come to love Showgirls for its audacity and camp value. Berkley has recovered and proven herself a capable and interesting actress, and currently heads up the Saved By the Bell revival on Peacock. The film itself has spawned two documentaries on its rise as a cult classic, You Don’t Nomi, and the forthcoming Goddess. If viewers can put aside the gratuitous violence, misogyny and ill-conceived nature of the project, Showgirls is downright hilarious to watch.

Moreover, though the film uses girl-on-girl bisexuality as a cheap way to titillate viewers, the movie does also have a weird pro-queer feel to it. Showgirls marks the first time we’ve ever seen two men slow dance in a movie, and Gina Gershon‘s bisexual villainess Crystal Conners has a certain unapologetic relish that makes her as empowering as she is loathsome. We’re not sure that’s what Eszterhas and Verhoeven intended, but hey, it’s probably the only compliment the pair deserve when it comes to this movie.

Lurid, sleezy, outrageous and mind-boggling, Showgirls is an utter failure as a movie, but always an entertaining film to watch. To quote the late Roger Ebert’s review (itself a hilarious read), “It’s trash, yes, but not boring.”