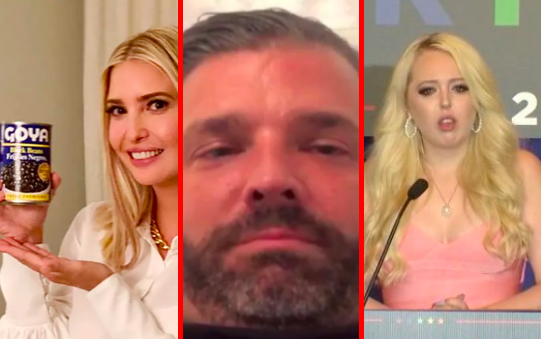 To say it’s been a crazy year would be a huuuuuge understatement. A lot of the craziness centered around the 2020 election, Donald Trump, and his loser kids and their spouses, who never seemed to miss an opportunity to embarrass themselves and, in turn, embarrass the country.

From staging photo opps with canned beans, to posting fart videos from quarantine, to forgetting what day the election was, Trump’s adult offspring offered near daily reminders that money can’t buy you class, common sense isn’t that common, and how sometimes DNA can be a real curse.

What in gay hell is this bullshit? Also there’s like 12 people in the room. Also I’m no longer convinced Eric Trump is the dumbest of them. It’s a tight race. pic.twitter.com/soqGBBwVNN

In October, Donald Trump’s forgotten fourth child made a special appearance at a Trump Pride event in Tampa, where she gave a barely coherent speech about issues she thought were important to the “LGBQIA+ community”, like how she writes all her own speeches, how her mom had tons of gay friends when she was a Broadway dancer for five minutes in the early ’90s, and how her dad is gonna find a cure for AIDS.