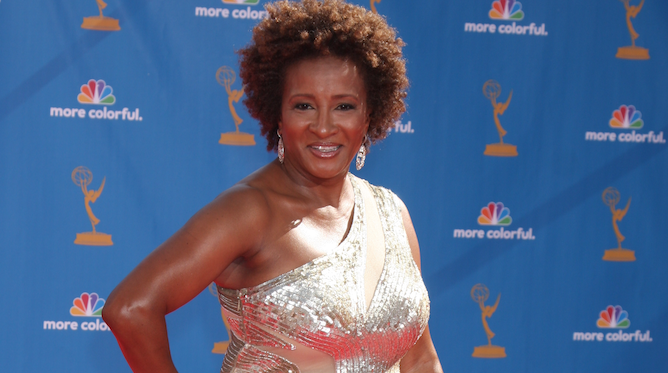 This profile is part of Queerty’s 2020 Out For Good series, recognizing public figures who’ve had the courage to come out and make a difference in the past year, in celebration of National Coming Out Day on October 11.

Bio: After a brief stint at the NSA, Sykes kicked off her comedy career in 1987 and got her big break opening for Chris Rock in 1995. She joined the writing staff of The Chris Rock Show in 1997, earning four Emmy nominations and one win. When she broke out on her own, she landed comedy specials on TV and won the 2001 American Comedy Award for Outstanding Female Stand Up Comic.

As a TV actress, Sykes has headlined Wanda at Large and starred in The New Adventures of Old Christine and Black-ish On the big screen, she has appeared in Pootie Tang, Evan Almighty, and the Ice Age films.

Coming Out: Sykes announced to the public that she was gay and married to a woman — Alex Niedbalski, with whom she has fraternal twins — at a 2008 same-sex marriage rally in Las Vegas. “When my wife and I leave California, I want to have my marriage recognized in Nevada, Arizona, all the way to New York,” she said, per Pride. “What’s wrong with loving each other?”

The comedian also refuted the idea that being gay is a choice. “That’s like telling me I chose to be a woman or I chose to be black,” she told the crowd. “Are people straight because they chose not to be gay?”

Making a Difference: In her coming-out speech, Sykes slammed three setbacks for gay equality on Election Day 2018: the passing of Proposition 8 in California, the banning of same-sex marriage and civil unions in Florida, and the stripping of gay adoption rights in Arkansas. And she vowed to continue fighting for equal rights for her LGBTQ+ community.

“They pissed me off,” she said at the time. “You know what? Now I got to get in your face. They pissed off the wrong group of people.”

“That’s what we do in our community: We make other families. If your family isn’t supportive, you’re going to find somebody who would be that surrogate parent who will love you and take care of you. You’ll make family. I did. Know that there’s places and people who will love you — and you can and you will have an amazing life.” – Wanda Sykes to O, The Oprah Magazine