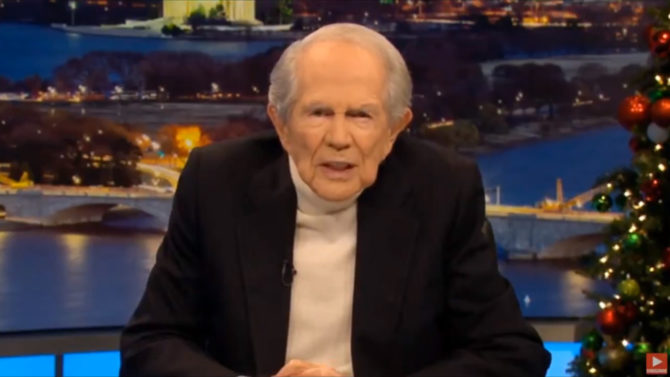 “With all his talent and the ability to raise money and draw large crowds, the President still lives in an alternate reality. He really does. People always say that he lies about this, that, and the other, but he isn’t lying. To him, that’s the truth. He had the biggest crowd on inauguration day. He had more people than ever. He saved NBC with The Apprentice. You can go down the line of things that really aren’t true…I think it’ll be well to say, ‘You’ve had your day and it’s time to move on.’”–Televangelist and noted homophobe Pat Robertson, calling on Donald Trump to accept his loss in the 2020 Election. Robertson further predicted that not only would Joe Biden be President, but Kamala Harris would as well. Robertson has his own history of loony accusations and claims, though this time, we have to agree with him.

Televangelist Pat Robertson declares that Biden will be president and that Trump “lives in an alternate reality,” “is very erratic,” and should not run again in 2024: “You’ve had your day and it’s time to move on.” pic.twitter.com/2WYCZOSNTO