Father paid to have his gay son attacked, court in Turin told  The Times

Immigrant
advocacy groups in a federal lawsuit they filed on Monday say the Trump
administration’s “death to asylum” rule would make it nearly impossible
for members of the LGBTQ community and people with HIV/AIDS to seek asylum in
the U.S.

Immigration Equality, the TransLatin@ Coalition, the Transgender Law Center, Oasis Legal Services and the Black LGBTQIA+ Migrant Project are plaintiffs in the lawsuit filed in the U.S. District Court for the Northern District of California in San Francisco. Acting Secretary of Homeland Security Chad Wolf and outgoing U.S. Attorney General Bill Barr are among the named defendants.

Lambda Legal is not a named plaintiff, but supports the lawsuit.

A press
release that announced the lawsuit says the new
Department of Homeland Security and Justice Department rule that takes
effect on Jan. 11 “eliminates eligibility for asylum to anyone with a
gender-based claim.” The lawsuit itself notes this change “has the
potential for altogether eliminating asylum relief for LGBTQ/H (lesbian, gay,
bisexual, transgender, queer and people with HIV) applicants.”

“The
Final Rule additionally eliminates asylum relief for many individuals who are
targets of individualized personal animus,” notes the lawsuit. “This
measure will devastate the many LGBTQ/H asylum applicants who have faced
persecution at the hands of people who act on societally and governmentally
sanctioned animosities against LGBTQ/H people.”

The lawsuit also says the rule “further harms LGBTQ/H asylum seekers by sharply limiting the circumstances in which applicants may claim asylum after passing through third countries (many of which are as persecutory of LGBTQ/H individuals as claimants’ home countries) or after being in the United States for more than one year (even though many LGBTQ/H claimants experience circumstances that render their claims timely).”

The lawsuit’s introduction also contains a portion “The New Colossus,” an Emma Lazarus poem inscribed on a plaque placed on the Statue of Liberty’s pedestal.

“Many transgender and gender nonconforming Latinx people face unimaginable violence, persecution and torture around the world,” said TransLatin@ Coalition President Bamby Salcedo in the press release that announced the lawsuit. “The majority of transgender women who seek refuge in the United States from these serious threats have nowhere else to go.”

“The safety and survival of
so many people depends on their ability to find a safe haven in this
country,” added Salcedo. “I was lucky to receive support from people
when I fled Mexico because I feared for my life. The TransLatin@ Coalition was
founded by trans Latin@ immigrants to improve the lives of trans Latin@s. While
the Trump administration has turned its back on its commitment to LGBTQ refugees,
we will not!”

Black LGBTQIA+ Migrant Project Director Ola Osaze added the
rules “are aimed at eradicating asylum for migrants who are Black,
LGBTQIA+ and/or women.”

“This rule would create a level of chaos that would make
it impossible for us to carry out many parts of our mission and would further
endanger the people whose lives and safety are already so precarious,”
added Osaze.

Advocacy groups maintain the
Trump administration’s hardline immigration policies — including the
“return to Mexico” policy that forces asylum seekers to await the
outcome of their cases in Mexico — have put LGBTQ asylum seekers at even
increased risk. They have also demanded U.S. Immigration and Customs
Enforcement release detainees with HIV because of the coronavirus pandemic. 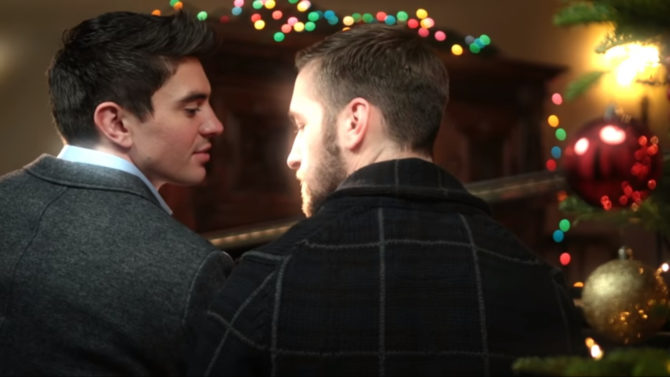 With Christmas just days away and COVID-19 cases spiraling out of control in some cities, the holidays this year look to be quieter than ever. Taking advantage of the hushed mood: singer Steve Grand, whose cover of “I’ll Be Home for Christmas” pays tribute to the bittersweetness of the holidays 2020.

Grand recorded and shot the video at home, while his director, John Lavin, oversaw the project from his home in Miami. Actor Trevor LaPaglia also participated from his home in Los Angeles, making the video a meta-comment on social distancing in and of itself. The footage of LaPaglia & Grand together is taken from Grand’s “All I Want for Christmas is You” video from 2015 which also starred LaPaglia. Grand calls the new video a sequel of sorts.

Related: Steve Grand Found What He Really Wants For Christmas

In the video, Grand plays a man missing his boyfriend (LaPaglia) during the holidays thanks to the pandemic. No doubt many of us can identify with the feeling this season.

Have a look, and grab the tissues. This year, it’s important to remember: home is where the heart is.