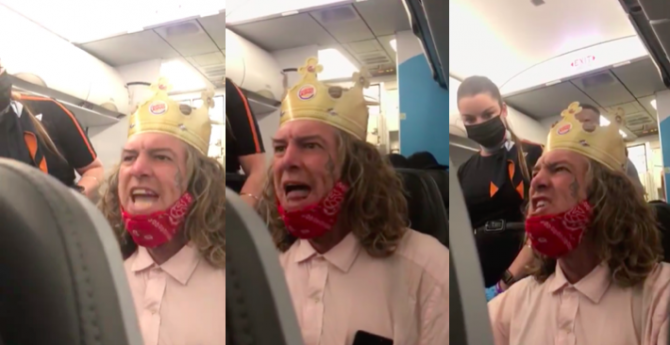 A toxic white male with a face tattoo and paper Burger King crown was kicked off a JetBlue flight after he threw a racist temper tantrum upon learning there was no more overhead space for his carry-on bag.

The incident happened over the weekend on a flight preparing to depart from Kingston, Jamaica to JFK Airport. Several videos show the man shouting until he’s red in the face, swearing, and repeatedly hurling the N-word at a woman who he claims assaulted him.

“Kick that n*gger b*tch off the plane!” the man shouts at two flight attendants while other the passengers look on in absolute disgust.

“She kneed me in the stomach!” the man continues. “Why are you in my face? Have I created any type of violence since I’ve been on the plane? No!”

Eventually, one of the flight attendants says, “I don’t care what she did. You’re being disrespectful.” And when the man still won’t calm down, she adds, “Shut the f*ck up for two seconds.”

So @JetBlue what y’all going to do about this? Got my lawyer on stand by?? pic.twitter.com/mbcI5Ry4dK

Police eventually arrived and removed the racist man from the aircraft in handcuffs. A spokesperson for JetBlue says he has been banned from the airline.

“We have zero tolerance for racism or harassment, and after reviewing this customer’s abhorrent racist behavior, we have determined he is no longer welcome to fly JetBlue,” the spokesperson said.