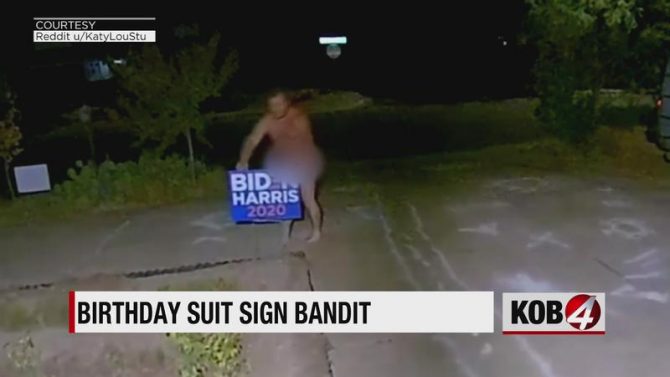 A naked man in Albuquerque, New Mexico was caught on camera stealing a Biden/Harris campaign sign from someone’s front yard and then escaping unnoticed into the dark night.

Security footage from the property owner’s camera shows the man, a white male believed to be in his 20s, emerge from the shadows without any clothes on, grab the sign, and then take off down the street.

The incident happened in the dead of night early Saturday morning. The property owner posted the video to Reddit and explained that the sign was later found on the side of the road a few blocks away.

A similar incident happened in Scottsville, Virginia last week when a middle-aged woman was caught on camera tumbling out of her vehicle and swiping a Biden sign from her neighbor’s lawn.

Unlike the Albuquerque man, however, the woman was fully clothed.

Since the naked sign swiping incident, police in Albuquerque have issued a statement reminding citizens that defacing or destroying political signage is considered a violation of 1st Amendment rights and is against the law.

Like most states this election cycle, New Mexico has seen record turnout in early voting, with more than 265,000 ballots cast so far. Biden is clearly favored to win the state, according to pollsters.