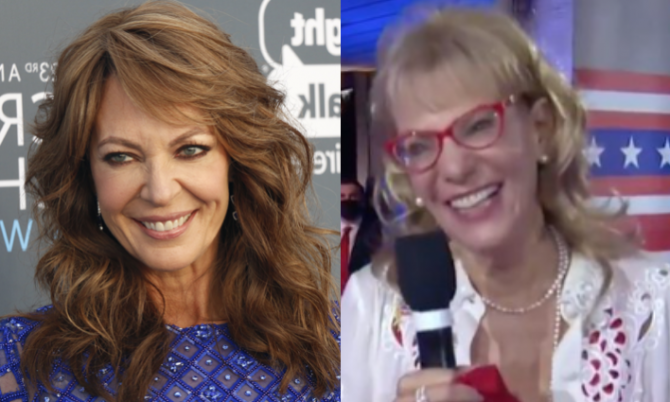 Saturday Night Live tapes in less than two days, and it’s clear that Twitter has found the ideal candidate to play Paulette Dale, the woman who bizarrely flirted with Donald Trump during his NBC town hall event on Thursday.

The undecided voter, a registered Republican and leaning towards Joe Biden, wore a patriotic ensemble and used her moment at the microphone to comment on Trump’s “great smile,” of all things. Oof.

Related: The internet is stanning Savannah Guthrie for calling Trump a “crazy uncle” to his face

“I have to say, you have a great smile,” she said before giggling and adding, “You’re so handsome when you smile.” Oof.

Voter to President Trump at #TrumpTownHall: “You’re so handsome when you smile.” pic.twitter.com/KgJThAtAQg

This is why Allison Janney is the best. pic.twitter.com/1cwjxoIxQD

Is this Allison Janney doing a bit pic.twitter.com/iizUldruzc

OFFICIAL PETITION TO GET ALLISON JANNEY ON SNL TO PLAY HER: pic.twitter.com/4DCCHQltm6

Allison Janney needs a better wig for this role pic.twitter.com/WtB7GYCwku

While the resemblance is certainly there, we’d imagine it would be far easier to cast, say, Kate McKinnon, seeing as she’s in the cast already.