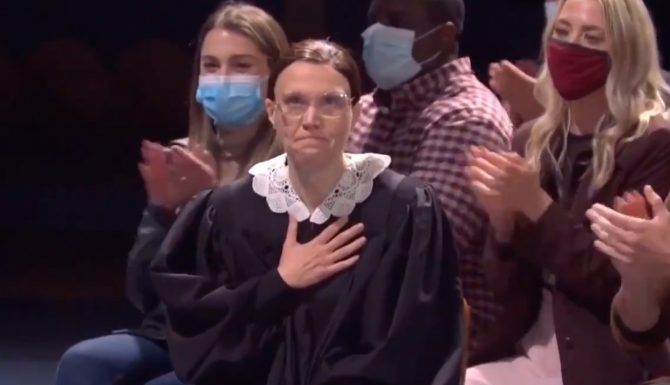 SNL returned with a vengeance this weekend, with a season opener featuring Chris Rock and Megan Thee Stallion, as well as Jim Carrey joining the show in a recurring role as Joe Biden. Amid all the fanfare–not to mention the craziness around the Republican COVID-19 outbreak–one cast member made a silent, powerful statement.

Following the “Weekend Update” portion of the show, openly gay cast member Kate McKinnon appeared in costume as the late Ruth Bader Ginsberg. McKinnon didn’t say anything, nor did anyone else on the show make reference to her appearance. Instead, McKinnon as Ginsberg lay a hand on her chest and bowed her head in respect.

A graphic displayed on the screen after McKinnon’s appearance featured Ginsberg’s iconic horn-rim glasses lay over her judicial robe. The caption said only “Rest in Power.”

We can’t know for sure, but we’re guessing McKinnon’s appearance and mimed actions probably reflect the actress’ personal sentiments as much as those of the show’s producers or her fellow castmates. Ginsberg championed women’s rights and the rights of LGBTQ people in her decisions, notably in the decisions that paved the way for marriage equality. And, like McKinnon, we’re forever grateful.

Kate McKinnon as RBG one last time. This is such a lovely way to do it. ?? #SNLPremiere pic.twitter.com/1tw3C3BlMV