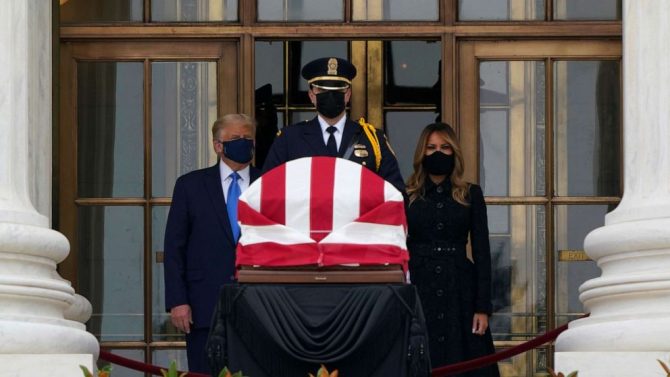 Donald Trump was greeted by a chorus of loud boos and chants of “vote him out!” when he swung by the Supreme Court yesterday to pay respects to the late Justice Ruth Bader Ginsburg.

Video shows Trump awkwardly rocking back and forth with Melania by his side. He stares straight ahead, no doubt dying inside, as the crowd grows louder and angrier.

The Trumps attended the second day of services for Ginsburg, who will lie in repose at the U.S. Capitol on Friday, making her the first woman ever to do so. A private burial will be held next week at Arlington Cemetery.

According to Ginsburg’s granddaughter, it was the last Justice’s dying wish that her seat not be filled until after the next president is sworn into office. That said, we think she would more than approve of people protesting Donald Trump at her memorial.

Trump at the court as crowd chants “vote him out” — it’s rare for this President to see his opposition this up-close and in-person pic.twitter.com/VEVkRHOkjM