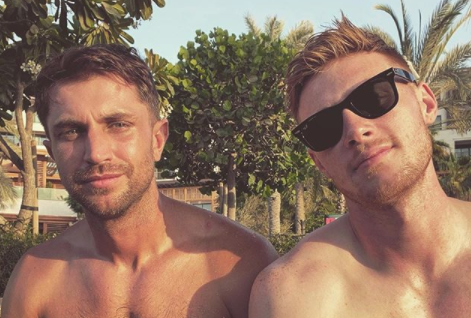 This is not a case of life imitating art.

Now the pair have confirmed they’re a happy couple

“It’s great to meet someone through work and have so many things in common and an understanding of each other’s jobs”, Mochrie told The Mirror.

Mochrie ended up leaving the show, but the two kept in touch (clearly).

“I don’t want to jinx things,” Mochrie added. “We are seeing how we get on. We had a great time on holiday in Dubai. Let’s see how it goes.”

He also shared what it was like to grow up with a warped sense of masculinity:

“Growing up in Liverpool I wrongly assumed that being gay was stripping every ounce of masculinity you had,” he said.

“I wanted to be like The Rock and I thought that’s what men had to be like.

“It was actually that toxic mantra that stopped me coming to terms with my sexuality.”

The couple initially sparked romantic rumors earlier this year, sharing photos of a trip to Dubai that looked slightly more than fraternal.

Here are some photos of the Instagram-ready duo: