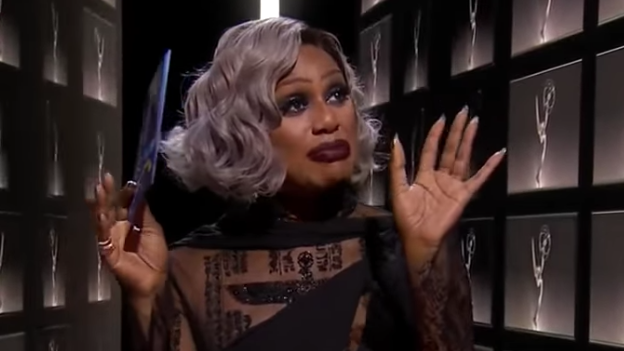 From where we’re sitting, it appears a censor at ABC got a little trigger-happy during the 72nd Primetime Emmy Awards show Sunday night. That’s the only explanation that makes any sense as to why audio to Laverne Cox‘s speech momentarily cut out during the network’s broadcast of the ceremony.

Cox appeared to present the award for Writing in a Drama Series, and dropped an “eff-bomb” that was apparently too much for network television. Huh…

Here’s how it went on ABC:

“Good evening everyone. I am living proof of the American dream that anyone in this country can lose the Emmy four years in the same category and yet somehow end up on this stage presenting an award to someone who probably didn’t … What happens to an American dream deferred? Does it shrivel up like a raisin in the sun? Stick to the script Laverne, stick to the script. And now here are the nominees for Writing in a Drama Series.”

It was an odd moment, seeing as the Orange is the New Black star didn’t curse. In the unedited clip, which was shared to YouTube by the Television Academy, Cox says, “yet somehow end up on this stage presenting an award to someone who probably didn’t effing vote for me.”