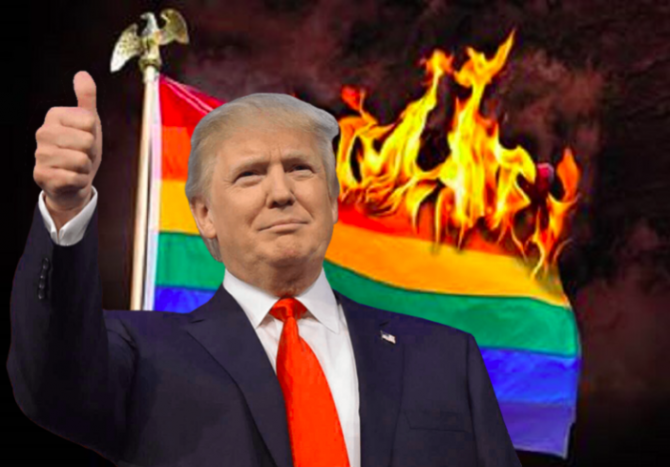 Donald Trump‘s campaign has called him the “most pro-gay president in American history,” but he and his administration have clearly not received the memo. Trump’s Department of Justice this week sided with Catholic leaders who ordered a private Indiana school to fire a teacher for being in a same-sex marriage.

The DOJ argued that the Roman Catholic Archdiocese of Indianapolis is “entitled to employ in key roles only persons whose beliefs and conduct are consistent” with its “religious precepts.”

Related: Trump supporters cheer as speaker calls for the murder of LGBTQ allies

Because Joshua Payne-Elliott is in a same-sex marriage, the government acknowledges that the world language and social studies teacher would “interfere with the Archdiocese’s public expression of Church doctrine regarding marriage” if he remained employed at Cathedral High School.

Payne-Elliott worked at the school for 13 years before being terminated just after his marriage. He filed a discrimination complaint against the archdiocese with the Equal Opportunity Commission and sued the church.

Related: Fired federal prosecutor’s tweets have to be seen to be believed

The Trump administration has been a staunch supporter of so-called “religious liberty” that LGBTQ activists argue leaves far too much room for discrimination.

“The administration is taking the position that religious freedoms give you a right to discriminate,” Louise Melling, deputy legal director of the ACLU, told NBC News.