Brash Boys Club features the comedy stylings of three openly-queer comics: Dash Kwiatkowski, Owen Alabado and Brad Loekle. Lee filmed the special live in January prior to the COVID-19 pandemic. For Lee, Brash Boys Club represents the latest in an intriguing career that has included the horror film Shopping for Fangs, the comedy The People I’ve Slept With, and the documentary Gay Hollywood Dad.

Queerty snagged a spot in the audience the night of the Brash Boys Club performance; watch for a second-row cameo from a certain Entertainment Editor. We also wrestled some time with Lee to discuss his approach to filming a live special, the exclusion of LGBTQ men in the comedy scene, and his future plans as a director.

How did you get involved here?

What happened was that Dash Kwiatkowski, the non-binary comedian, approached me. I was doing Comedy Invasion, an all Asian-American comedy show. That was on Hulu in 2018. After that, he contacted me to say he wanted to do something, but he didn’t know what. I’d done Brash Girls Club, the girl version. I’d always wanted to do a Brash Boys Club, the gay male version of it. Knowing that gay male comedians are not as prominent—I don’t know why. There are great lesbian comediennes from Wanda Sykes to Ellen, but there are almost no famous gay, male comedians. So I wanted to do this special.

The first person I contacted was Dash. I thought it was great that he was non-binary, but I did ask “Are you more of a boy or a girl? We’re doing a boy’s show.” And he said, “Sure, I’m more a boy.” But I loved that he was non-binary because it made for more diversity. So Dash said yes, and I had to look for two other gay male comedians. I went to Owen after I found him online. I found him to be really funny. And after Owen, I went to Brad. So I kind of created the whole thing and put it together to show the diversity of gay male comedians. And that’s how it started.

Well, let’s talk about something you say there. There are many gay male comedians out there.  I’m also thinking of Mario Cantone, Billy Eichner, Joel Kim Booster, Chip Pope, Tom Lenk, Dewayne Perkins. Why don’t we see more gay, male stand-up comics? Gay men are the funniest people in the world.

Yeah. It’s funny. Much as there are not as many female stand-up comics because the whole comedy club scene is very heterosexual, a boys club kind of thing. So a lot of times if you are a gay male comedian or even a female comedian playing a comedy club, they ignore you. It’s that level of institutionalized sexism and homophobia even within the stand-up comedy industry. Traditionally, it’s very heterosexual.

That’s why I did Brash Girls Club, to play with the genre, and now, Brash Boys Club. But that’s what it is—a very heterosexual male-dominated scene.

That’s very interesting. So when you film a live event like this, it’s very different from a scripted film or a documentary. It’s closer, I think, to a sports event. How does that affect your approach?

I tried to have a rehearsal because I wanted to see what was going on. If they do something really crazy, I need to know where to put the camera. Two of them are from LA, Dash is from New York. I wanted to at least see the steps so I would know the content of it. It’s almost like shooting a documentary. It is really the content of the comedian which is absolutely created; it’s not reality. It’s funny, we did two sets, and Brad said he didn’t really rehearse. So I said, “Make sure you’re in the vicinity of the camera, so we can pick you up.” So we came back, and we shot it. I had six cameras set up.

In the beginning, we shot like a documentary. Then I shape a lot of the performances. We shoot two shows, then in the editing room, I get to reshape the performances, the narrative, and sometimes even the order of the comedians. This is why I have to edit the piece. Basically, with Brash Boys Club I’m putting together a feature film. Three comedians, three acts, 30 minutes [each]. Depending on the theme and the energy, I might shift them around. Even in the two shows, someone might be better at one performance. For example, Dash was much better in his second set.

He was much more comfortable. So most of his performance I pulled from the second set. Most comedians are actually better in the first set, because it’s when they have the most energy. Owen and Brad, I mostly used their first set. I may have had to pull some fixes, some lines, and put everything together. It seems transparent in post-production, but it’s a lot of shaping in the editorial process. What I like about it is that it’s entertainment, not a documentary. You’re still creating a piece of art, but in a weird way, editing the art piece. You create an entertainment product. That’s what I love about comedy: generally shooting time is short, but intensive. You shoot a lot in minimal time, but you create a piece of art.

So how long did it take to edit?

I think the first cut I took about a week. Then I took another two or three weeks to tweak. A lot of times with comedy, you have to test it out to see what’s funny or not funny. With Brash Boys Club, one thing I struggled with was a part of Dash’s set where he talks about drug addiction. He’s also currently sober. So I talked to the executive team and said “Do you think this is too edgy? Should I take it out?” At the end of the day, we all agreed there was something really genuine about it, even though it’s incredibly edgy. In the end, we kept it in because we wanted to keep the set as authentic as possible. And again, what’s interesting about comedy is that it is so visceral. It comes from a comedian’s heart. Right now, in this culture, you still have to think about these creative decisions before you put them out.

Some of the best bits of the show are the pre-show backstage moments you filmed with the comics. Did you warn them in advance?

I gave them a concept that I wanted to do something to open the special. So we discussed what they wanted to do and shot it before the show. It was basically improvisation. 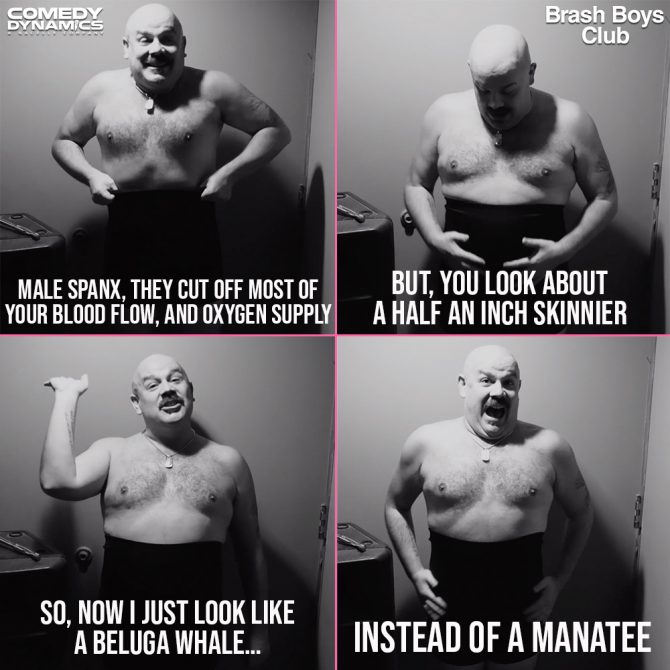 When you interview someone like that, how do you get them to let their guard down and be natural?

As long as I feel like they’re comfortable, I let them do whatever they do. Even the thing Brad does about the male spanks, we shot it a couple times and it worked. With Owen doing tai-chi, we shot in several different locations. It’s performance on the fly. It’s very freeing. I like getting a performer to do that.

So much of your work deals with queer identity, Asian American identity, or both. This is no exception. What is it you’re still looking for in your work? What are you trying to find within yourself?

I feel like I want to find a connection with an audience with the content I put out. Obviously, I’m not interested in just directing the next Fast and the Furious or Star Trek or whatever. All my life I have wanted to create my own, original content, and to find an audience for it. As I’ve progressed as an artist over the past 20 years, with technology, with social media, I’m really close to reaching an audience that would appreciate what I’m putting out from my heart. I think that’s what every audience wants to do—to make the things they want to make but find the right audience to connect with it. Even with the themes in my films, the over-arching theme is always about somebody from outside a community trying to find a connection with a broader audience. It’s very much the same reason I wanted to do Brash Boys Club: gay male comedy isn’t part of the mainstream. All my life I’ve been trying to create art that is diverse. Finally, with technology and social media, its happening.

Listen, when I went to film school in 1992, both Justin Lin [director of The Fast and the Furious films] and I would write a screenplay that had an Asian-American family, or a gay protagonist. And people would say “Oh my God, what a great script. It will never be made.” Back then, they couldn’t even make any kind of mainstream film or TV series without a heterosexual, white male protagonist. Now, 20 years later, it’s finally opening up. Hollywood is catching up. 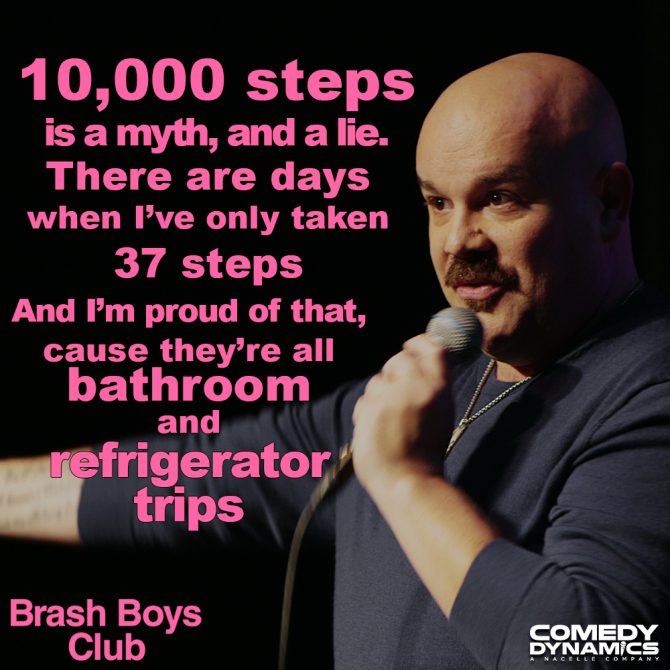 And diversity is nothing new. When I went to Berkeley from 1988 to 1992, I already knew multiculturalism was very important. I was part of the multiculturalism of that time. Only now, 30 years later, Hollywood is catching up. We need diverse faces on the screen, whether it’s gay or trans or Asian-American or African-American. So I’m just waiting for the world to catch up so I can put my product out there.

That’s a great attitude. And I think the audience is more sophisticated than it seems at times.

Yeah. Finally, the market is opening up. It’s funny, one of the reasons I love working with Comedy Dynamics is they handle all the big comedy specials from Ali Wong to Kevin Hart. Then they will take on this little gay comedy special and treat it with respect. I give them a lot of props. Also, in the comedy genre, people are less conservative. With Comisery, to do this little Zoom film, I talked with distributors and literally nobody got back to me.

So I put it out myself, which was the right move. Most of the distributors are still run by old white guys running on the politics of 20 or 30 years ago. They see something like Comisery and don’t know what to do with it. But now, we have Amazon Prime and all these other avenues to get content out. That’s how I got Comisery out. And I’m very grateful that Comedy Dynamics is willing to do Brash Boys Club.

I’m glad you mention Comisery, that’s good segway. You love taking risks as a filmmaker. You show off your own life in Gay Hollywood Dad. You do something experimental with Comisery. Now you’re doing a comedy special about comedy outcasts. These are risky projects. What do you love about taking a risk?

You know, I think I started off as an experimental filmmaker. So for me, I love playing with new genres and new formats. So whether it’s comedy or shooting something on Zoom, for me, it’s fun to do. My first feature, Shopping For Fangs in 1997, which was ahead of its time. It premiered at the Toronto Film Festival, but no distributor bought it. Nobody knew what to do with it, so I had to self distribute. I’ve gotten so used to distributing my own work, and from 2015 on there are so many new avenues to put something out in a non-traditional way. When I was younger, just out of film school, I wanted to make a conventional narrative film. I felt like I had to in order to be successful. But as you grow older, as an artist, you think you know what? What I love about film is to be experimental. So that’s part of me.

What’s next for you?

I’m doing a horror film called House of Chocolate Spirits. It’s a high budget project, based on the true story of a San Francisco psychic. I’ve attached Veronica Cartwright to play the lead.